by Cat Brooks
“Dr. King was a freedom fighter and he taught me how to fight. We gonna fight all day and night until we get it right!” 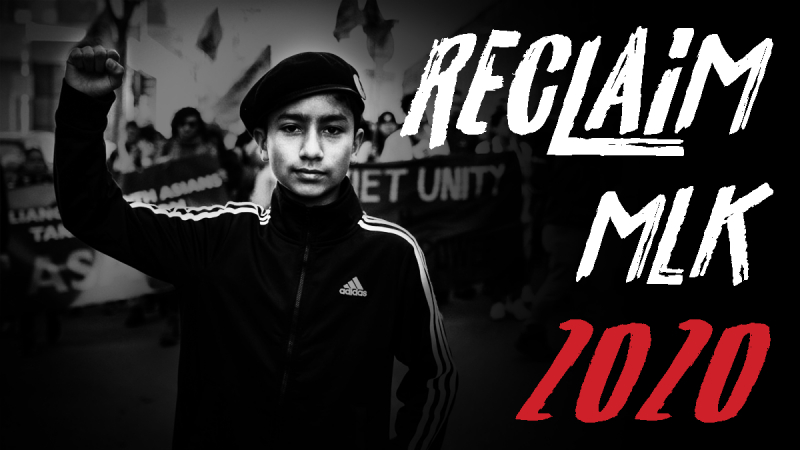 
Those are modified lyrics from one of my favorite protest songs. They are so relevant as we prepare to celebrate the life and legacy of Dr. Martin Luther King Jr. this coming weekend. While the image of King has been largely whitewashed by mainstream media; it is critical to remember that he was a freedom fighter who put his body on the line for the liberation of Black people. He stared down water hoses, withstood dogs, took beatings, engaged in direct action and civil disobedience and went to jail multiple times for what he believed. So when they try to use King to disparage the passion and tactics of organizers and activists today - it is clear they have spent little time studying the true legacy of this great leader.

We Gonna Fight All Day and Night ...

We fight with mothers to keep them housed at 5:00 in the morning when sheriffs show up with battering rams and AR 15s

We fight with teachers and students who are facing school closures, under budgeting and unconscionable conditions in their schools

We fight. But we are not fighting in vain. We WILL get it right. I deeply believe that if we keep fighting, keep strategizing, keep organizing, keep resisting, keep building alternative models, keep forcing radical policy shifts, keep electing real progressives into office … We. Will. Win.

This Monday, join me and APTP as we celebrate not only the courageous people who put their bodies on the line every day in the fight for a just world but also the inevitable win coming our way! Celebrate the Radical “rational” legacy of Dr. King when, for the 6th year in a row, we rally and march in his name.
END_OF_DOCUMENT_TOKEN_TO_BE_REPLACED
Related Categories: East Bay | Racial Justice
Add Your Comments
Latest Comments
Listed below are the latest comments about this post.
These comments are submitted anonymously by website visitors.
TITLE
AUTHOR
DATE
Run Cat run!
Peace Witch
Support Independent Media
We are 100% volunteer and depend on your participation to sustain our efforts!