by Zack Haber, Oakland Post
The Village, a group that fights for unhoused resident rights, is asking for community support on January 18 and 19, 2020, to help with their event Guerrilla Housing: Reclaiming Dr. King’s Legacy of Radical Action. 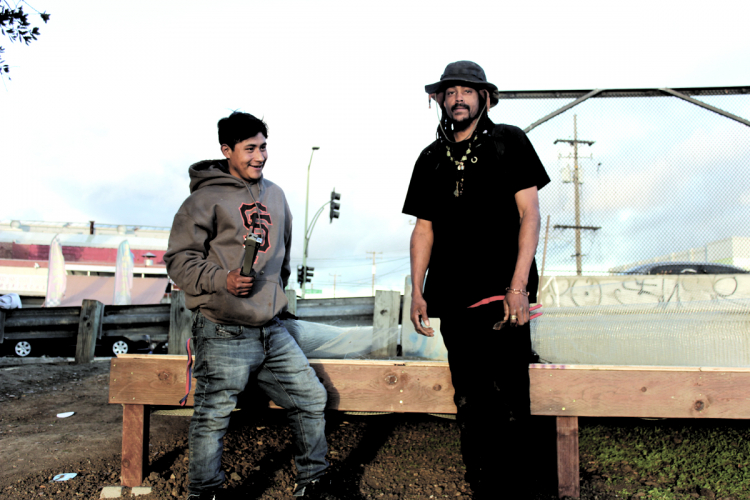 original image (1200x800)
[Chino (left) and The Village member Ayat Bryant-Jalal (right) are constructing a small home for an unhoused Oakland resident. They’re inviting other Oaklanders to participate in The Village’s Guerrilla Build: Reclaiming Dr. King’s Legacy of Radical Action event, which takes place from 10am to 5pm on Jan 18 and 19. Photo by Zack Haber.]


“Over time, Dr. Martin Luther King Jr. has been watered down and made to seem as a safe and passive figure,” said Needa Bee of The Village, who’s helping to organize the event. “But what he was really doing was direct action. He was disrupting the system. (Guerrilla Housing) is part of the movement to reclaim his radical legacy.”

The group along unhoused residents it’s helping to collaborate with plan to build small houses for unhoused residents on a plot of land that runs along East 12th Street between 14th and 16th avenues. The Village is asking for community support from those with construction skills, especially those who can bring tools.

They’re also asking for anyone to come who can help with clean up and trash collection as well as those who can bring, prepare, or serve food.

Cain lost his housing two years ago when a new landlord raised the rent on the home he’d lived in for 10 years from $900$ to $1400 overnight. Cain has a background in construction and plans to build a home for himself and help others to build homes as well. He currently sleeps outside and claims that, due to the lack of shelter, he usually is only able to sleep two days a week. He hopes the improved shelter will offer him more stability.

Brent Shipp also plans to help build homes on January 18 and 19 and currently lives on the plot of land in a small home he built. “It’s a big step forward going from a tent to a house,” said Shipp.

The City of Oakland destroyed self-made homes and/or evicted people who live in them along 81st to 85th avenues in Sept. 2019, and along High Street near Oakland’s Home Depot in Oct. 2019, by citing fire-code violations.

Some of the people displaced by the evictions or destructions were offered space in the city’s Community Cabin Sites, 10’x12’ sheds for up to six months. In Nov. 2019, one of the sheds at a Community Cabin site burnt to the ground.

Cain and Shipp both lived in a Community Cabin site after being evicted by the city but the program wasn’t sustainable for them. They both claim the city kicked them out of the Community Cabin program in less than a month for not spending enough time on the site.

Shipp greatly prefers his self-built home to the shed the city had provided because it’s twice as big, better insulated, and he can come and go as he pleases. He also complained that the Community Cabins had strict limits on when visitors could come and wouldn’t let him cook food, issues he doesn’t have to deal with in his own home.

“It’s just like a prison cell,” said Shipp, of the Community Cabins. “You’ve got a cot on one side and a cot on another side and a space in the middle to live in.”

Needa Bee claims the goal of the Guerrilla Housing effort is to make a more sustainable community and to offer more stability than the city’s programs can offer.

“You can’t put a time limit on what it takes for people to get stable,” said Bee, who criticized the six-month limit that the city places on their programs. “Some people have been out here 10, 20, or 30 years. There’s a whole re-programing into regular life and people need all the support they can get.”

The Village plans to help people stay in their self-made homes for as long as they need.
END_OF_DOCUMENT_TOKEN_TO_BE_REPLACED
Related Categories: East Bay | Racial Justice
Add Your Comments
Support Independent Media
We are 100% volunteer and depend on your participation to sustain our efforts!