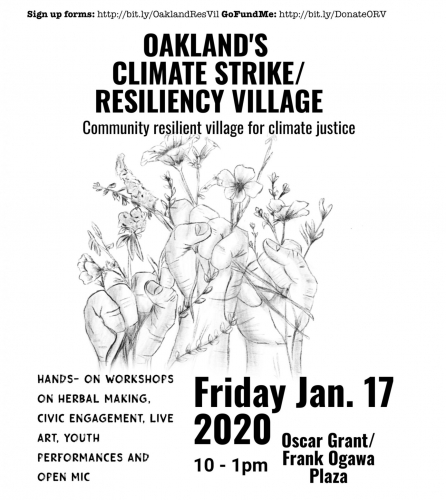 WHAT: Oakland middle and high school students will strike from school, along with adult allies, to create a “resilient village” that teaches the community how to advocate for climate action and build resilience to climate breadown . To educate our people, we will have four quadrants: Science for Survival, Civic Engagement, Visual Arts, and Voice and Performance. Science for survival will contain hands on projects like learning how to use car batteries as an energy source, how to purify water, and how to practice carbon sequestration in your home. In civic engagement people will learn how to engage with politicians and ways we can try to persuade them into making our world into a better place through policies like the Green New Deal. Visual arts will contain a huge street mural. Voice and Performance will contain speeches, drumming, dances, music, and more. The quadrants will educate our youth and community in a fun and friendly way to show how to live sustainably in an unjust world.

VISUALS: Street murals, giant banners, activity booths, youth dancing, youth drumming, youth speeches.
END_OF_DOCUMENT_TOKEN_TO_BE_REPLACED
Added to the calendar on Thu, Jan 16, 2020 6:59PM
Add Your Comments
Support Independent Media
We are 100% volunteer and depend on your participation to sustain our efforts!