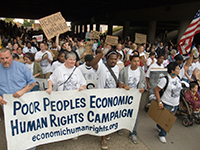 The 2008 Republican National Convention was held in St. Paul, Minnesota, September 1st through September 4th. In the Twin Cities, the RNC Welcoming Committee and a number of ad hoc regional activist groups made plans to demonstrate on the first day of the convention, September 1st. Twin Cities and Federal authorities moved hard against the activists by pre-emptively raiding a convergence space and numerous houses, confiscating equipment, and making arrests. After the convention began, police used tear gas, pepper spray, beanbag projectiles, and other weapons against demonstrators throughout St. Paul. Despite that, many groups did hold actions in the streets of St. Paul.

Friday, 9/5/08: As the convention itself ended, and street protests and police violence subsided, locals and travellers who spent the week in St. Paul began to take a deep breath and reflect on RNC-related events. Without any chance to rest, the on-going struggle for release of prisoners still in captivity continues. In all, over 800 people were arrested at this year's RNC in St. Paul, including journalists, camera people, videographers, street medics, and legal observers. As arrestees have been released, first-hand and second-hand stories of torture and rape in the Ramsey County Sheriff's Jail continue to trickle out. The deadline for the Dakota people to vacate land they wish to reclaim at Coldwater Spring in S. Minneapolis came and went without police showing up. The Dakota scheduled and held a press conference at 2pm, an hour before police said the permit they did not ask for expired. [Coldwater update: on Saturday, the Dakota finished their ceremonies, declared victory, and left Coldwater Spring for the time being.]

Thursday, 9/4/08: This morning the RNC Welcoming Committee held a joint press conference with the Poor People's Economic Human Rights Campaign regarding the charges announced the day before against eight Welcoming Committee members, the violent tactics of the police, and the media's role in focusing more on a broken Macy's window than the hundreds or thousands of people gassed and otherwise attacked by police this week. One person who had been arrested testified about having been tortured in the Ramsey County Sheriff's Jail. More people who had been arrested this week were released from jail throughout the day, but the sheriff's department continued to drop many of them off in remote locations around the Twin Cities area. In the afternoon, area students organized as Youth Against War and Racism walked out of class to march to the Capital in St. Paul. Also, nearby the convention center perimeter, Ed Matthews, a Republican candidate for the US Congress, grabbed a McCain mask from a street theater performer with Insane Reagan — the performer was tackled and arrested by police when he tried to retrieve his stolen mask. In the late afternoon, more people gathered at the Capital grounds for the Anti-War Committee's unpermitted "No Peace for the Warmakers" march on the last day of the RNC. Not long after people began marching to area bridges, police issued a dispersal order, then launched chemical weapons and concussion grenades throughout downtown as the large group split into two and various other smaller groups. On one bridge, 100 people were arrested. Total arrests count up to 400 for the evening. An urgent call went out for supporters and the media to show up at the Dakota people's Camp Coldwater to help them hold it at 3pm Friday when their permit is set to expire.

Wednesday, 9/3/08: Eight RNC Welcoming Committee members are charged with "Conspiracy to Riot in Furtherance of Terrorism" and potentially face years of jail time. Four of them are released, as well as dozens of others who begin to filter out of the Ramsey County Sheriff's Jail. Charges were dropped against many, but the Sheriff's Dept. is retaining much of their personal property for the time being and intends to permanently keep cameras and similar items as "evidence." The Tin Can Comms Collective was released without charge. A vigil continues at the jail. I-Witness Video collective was harrassed by the police leading to them being evicted from their office space in St. Paul. The Dakota people continued their reclamation at Coldwater Springs, although police agencies seem eager for Saturday's eviction when the permit expires. After a Rage Against the Machine concert in Minneapolis, concert-goers discovered hundred of riot police outside the venue awaiting their exit. Demonstrators marched into the streets and police tear-gassed the protestors and arrested at least 31 people, although most were quickly released.

Tuesday, 9/2/08: An on-going jail vigil supported by Coldsnap continued at the Ramsey County Jail for those arrested in the last few days. The Dakota people reclaimed their sacred space at Coldwater in South Minneapolis, and after a stand-off with police the Dakota were granted a 4-day permit for ceremonies. An outdoor concert at the Capital Building in St. Paul called the Ripple Effect was held, with a second stage on the same grounds hosted by the Sustainable Living Roadshow — concert performers included Dead Prez, Michael Franti, Anti-Flag, and others. A heavily guarded Poor People's March through St. Paul ended with an organizer placing an order for a citizens arrest for George Bush for crimes against humanity under the barricades surrounding the Xcel Center. Following the march, a massive riot police presence at the end of the march attacked those who did not disperse fast enough with tear gas, pepper spray, and concussion grenades.

Monday, 9/1/08: Activists are in the streets doing their best to disrupt today's first day of the RNC, largely by blocking RNC delegate's transportation routes to the Xcel Center. Police of all kinds are out in force trying to disrupt the activists by making swift arrests and moving to the next hot spot. Early reports of police use of both pepper spray and tear gas have been called in to local dispatch lines. Macalester students marched from their College to the State Capital to join the large, permitted anti-RNC march which began at noon, from which at least one black bloc breakaway has taken to the streets. A "Funk the War" street party was attacked by police with chemical weapons. The Tin Can Comms Collective, responsible for protest SMS message updates, were raided and arrested in the afternoon, in another pre-emptive action by police. TC-IMC assumed responsibility for keeping activists updated in the streets via SMS messages. By 9pm, local authorities had arrested 284 protesters, of whom 130 were charged with felonies, and the National Guard was reported to be marching through downtown St. Paul. A number of journalists were arrested or detained, including Democracy Now's Amy Goodman, who was arrested for alleged "rioting" and later released.

Sunday, 8/31/08: Veterans for Peace held a rally at the St. Paul Capital Building before their permitted march. They also led an unpermitted civil disobedience break-away from their own march that ended with several people breaching a police barricade near the Xcel Center, site of the 2008 RNC, and getting arrested. Separately, the IWW attempted to escort a fired then re-instated Starbucks worker to his job at the Mall of America and they were turned back by riot police. Anti-RNC activists continued to meet and plan throughout the day for actions at the now-truncated RNC (ostensibly due to Hurricane Gustav being forecast to hit New Orleans on September 1st).

Saturday, 8/30/08: Following the convergence center raid the night before, Ramsey County Sheriffs began raiding a half dozen houses across the Twin Cities in the morning and confiscated more items. Several Welcoming Committee members have been arrested and are being held without bail on various "conspiracy" charges. Undeterred, activists continued to hold meetings on August 30th in public parks and later at the convergence center again to plan actions for September 1st .

Friday, 8/29/08: Police with guns drawn raided the Welcoming Committee's convergence center south of downtown St. Paul. Approximately 50 people were detained inside while police searched the building and photographed them before they were allowed to leave. Police confiscated laptops, cameras, maps, and other items. The entrance to the convergence center was boarded up, but then re-opened for further activity on Saturday afternoon after intervention by a member of the St. Paul City Council on behalf on the activists.

Indybay Coverage of 2008 DNC in Denver