by dave id
Starbucks workers at the Mall of America in Bloomington, Minnesota, unionized with the Industrial Workers of the World about a month ago. One worker, Erik Forman, was wrongly fired due to his union organizing. With pressure from the IWW, Starbucks reinstated him and he was set to return to the job today. Riot police at the Mall of America turned back the IWW, but Erik was still able to make it to the job. Jake Bell (pictured below) was interviewed about the day's events and the future plans of the local IWW. 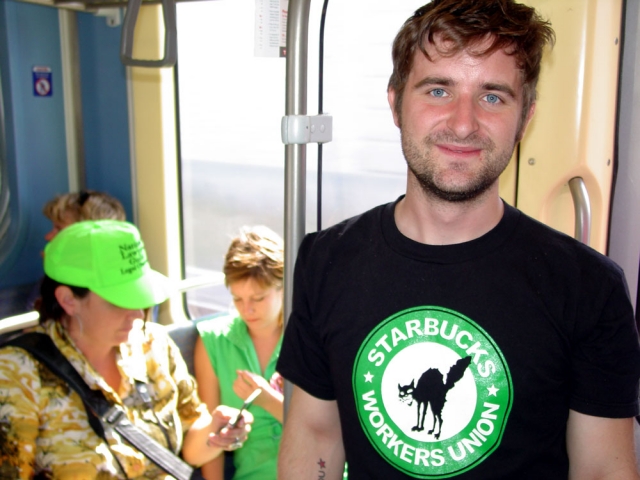 original image (1000x750)
As an act of solidarity, several dozen local IWW members and supporters, along with National Lawyer's Guild observers, intended to peacefully escort the reinstated Erik Forman to the Mall of America. In line with recent police aggression in the Twin Cities related to the 2008 RNC in St. Paul (see http://www.indybay.org/newsitems/2008/08/30/18531223.php), police massed at the IWW rally point at the light rail station at Lake & Hiawatha. Initially, police refused to allow the IWW access to the light rail station so that they might escort Erik back to the Mall of America. Later, the IWW was allowed to proceed. Two stations from the mall, police again seemed to be ready to prevent the group's access to the mall yet then allowed the train to proceed. Finally, at the mall itself, a line of riot cops from Plymouth, MN in full riot gear refused to allow the IWW to disembark from the train. Other unrelated passengers, including one diabetic in need of insulin, were also not allowed to leave the train as it was held with the doors closed. Eventually, the train was just sent in the other direction, away from the mall, with no one allowed off. At the first stop in the other direction, Erik Forman got off and walked to his job at the mall. Jake Bell was interviewed right after the IWW returned to the original light rail station.

8/31- Day of Action Against Capitalism: All out for the IWW Starbucks Workers!
http://twincities.indymedia.org/2008/aug/831-day-action-against-capitalism-all-out-iww-starbucks-workers 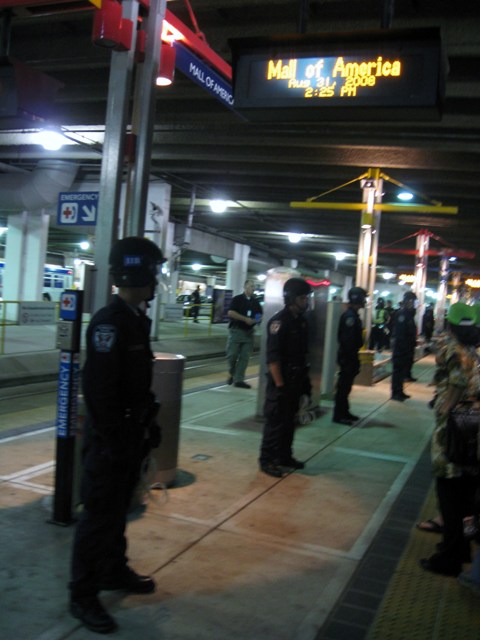 Welcome to the Mall of America
END_OF_DOCUMENT_TOKEN_TO_BE_REPLACED
Add Your Comments
Latest Comments
Listed below are the latest comments about this post.
These comments are submitted anonymously by website visitors.
TITLE
AUTHOR
DATE
Thanks for the catch
admin
Minor correction
Wob
Support Independent Media
We are 100% volunteer and depend on your participation to sustain our efforts!