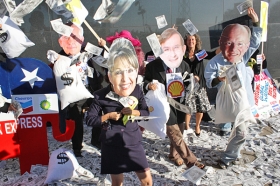 Demonstrators Do It with Humor at Republican National Convention
San Francisco Style of Protesting Amuses Some Republicans, but One Reacts with Violence

During protests at the Republican National Convention in Minnesota, performance artists from the San Francisco Bay Area rolled around in "Oily Dollars" symbolizing the dirty connection between Big Oil and elected officials. While many of the conventioneers tried to stifle laughs, activist-actors made political points with humorous street theater, getting daringly close to the delegates. They met the Texas Delegates for breakfast outside of their hotel with yellow "Support Our Oil Companies" ribbons. At a nearby venue, a San Francisco resident masked as Sarah Palin beat a polar bear with a bag overflowing with dollar bills while dancing to the Beatles' "Money, That's What I Want". "Sarah's" dance partners were frolicking oil executives with oversize heads, name tags, and company logos.

Not all convention attendees were amused, however. Ed Matthews, Republican candidate for Minnesota's 4th Congressional district, took after Jeff Grubler of the performance group Ronald Reagan Home for the Criminally Insane, grabbing Grubler's McCain mask. When Grubler tugged on Matthews' credentials, he was thrown to the ground by a uniformed officer who cuffed him while keeping his knee on the back of his neck. Grubler was then arrested and released after being detained for close to an hour. Matthews, meanwhile, was escorted into the safety of the convention building.