Add an Event
Newswire
Calendar
Features
Home
Donate
From the Open-Publishing Calendar
From the Open-Publishing Newswire
Indybay Feature
Publish to Newswire
Add an Event
Related Categories: U.S. | Anti-War | Government & Elections | Police State & Prisons
Veterans Memorial March to RNC, March and Civil Disobedience, 8/31/08: photos
by dave id
Sunday Aug 31st, 2008 9:48 PM
Veterans for Peace, local 115 from Red Wing, MN, organized a march with affiliates from around the country on the day prior to the beginning of the 2008 Republican National Convention in St. Paul. Before the march even started, organizers announced that the march would be splitting into two groups, one that would follow the permitted march route and another that would engage in civil disobedience by taking a non-authorized route and attempting to reach the Xcel Center, site of the 2008 RNC. 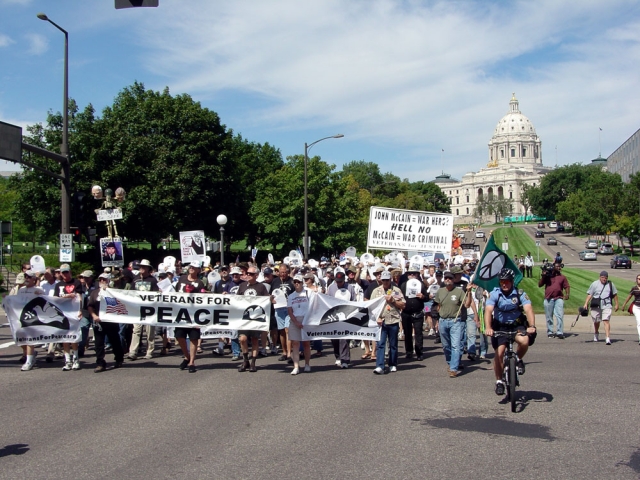 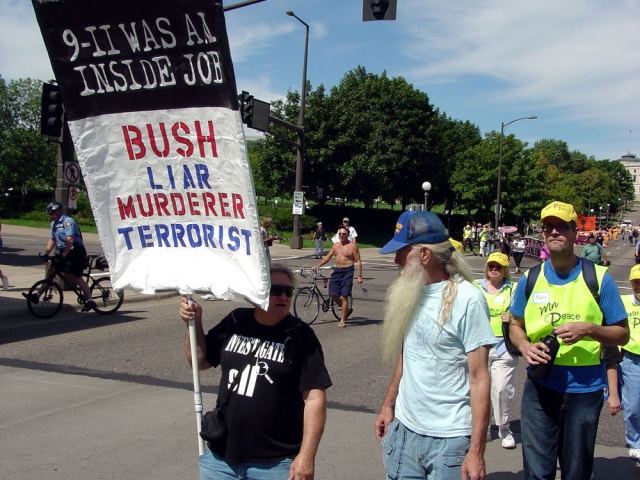 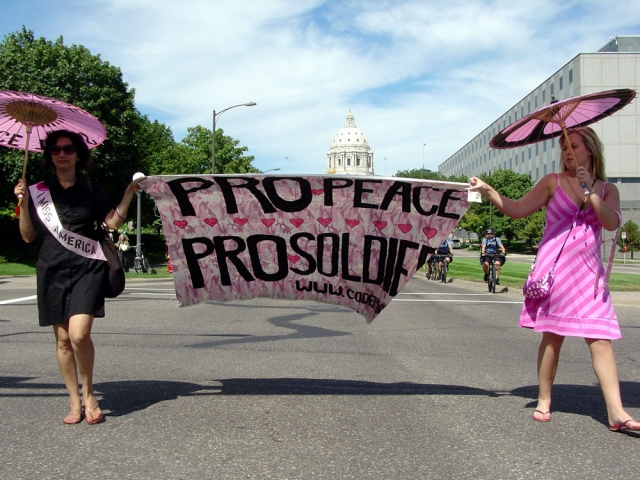 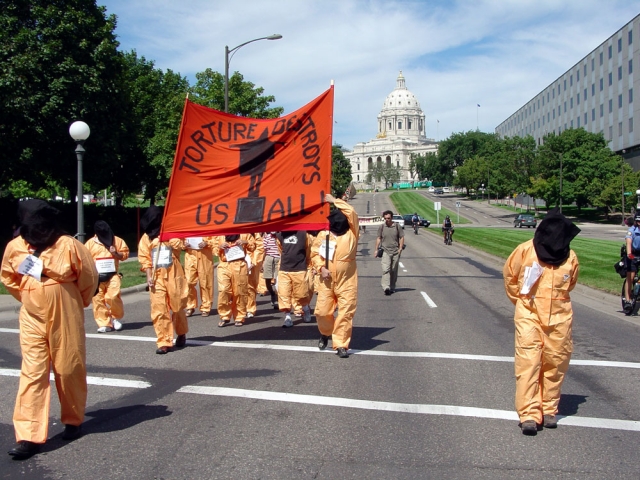 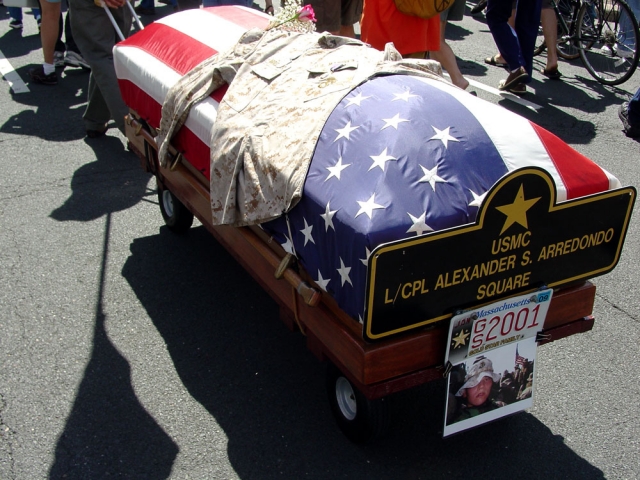 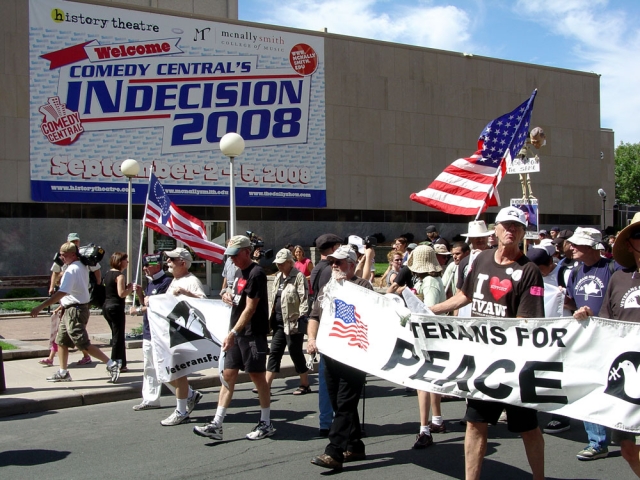 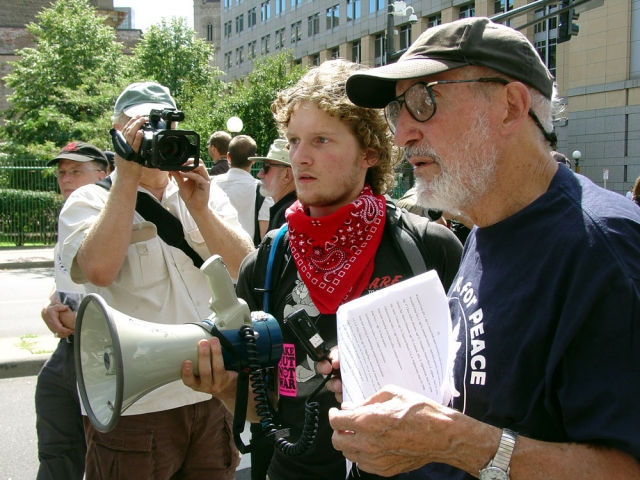 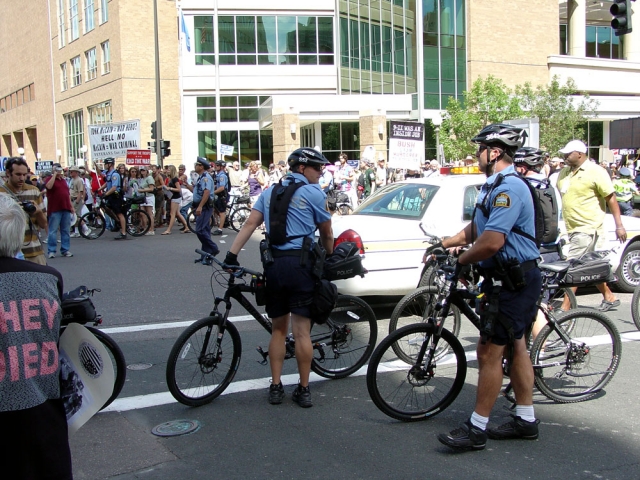 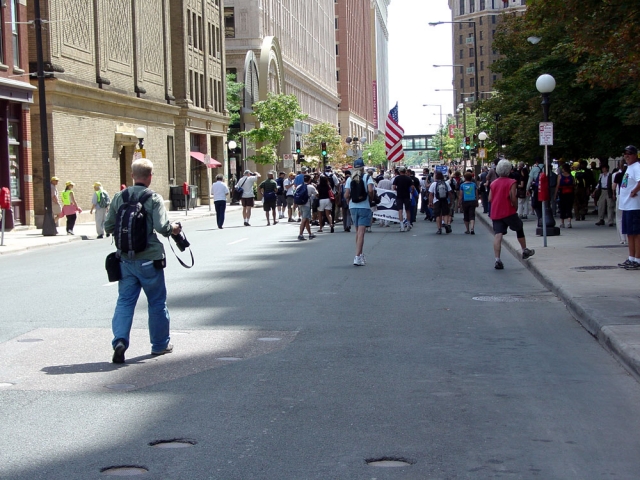 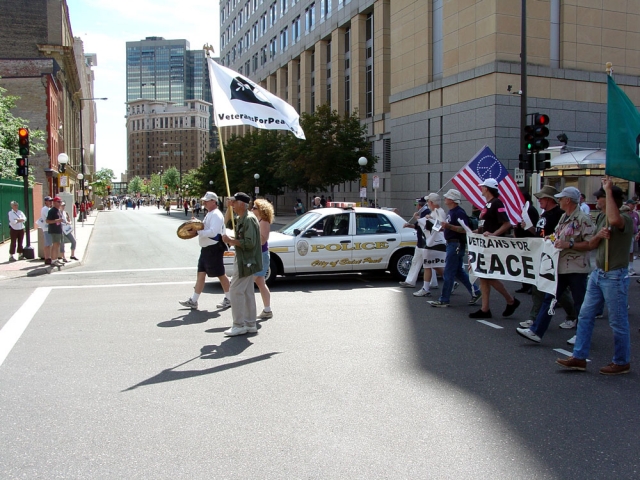 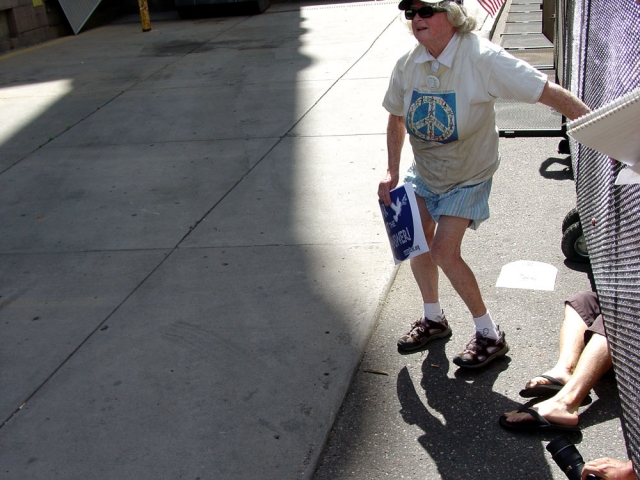 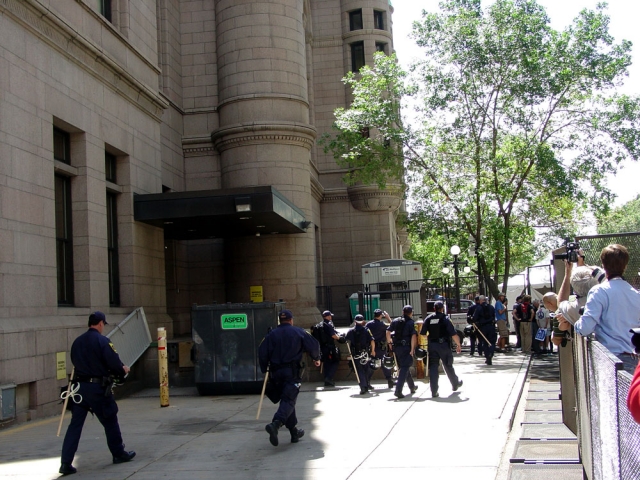 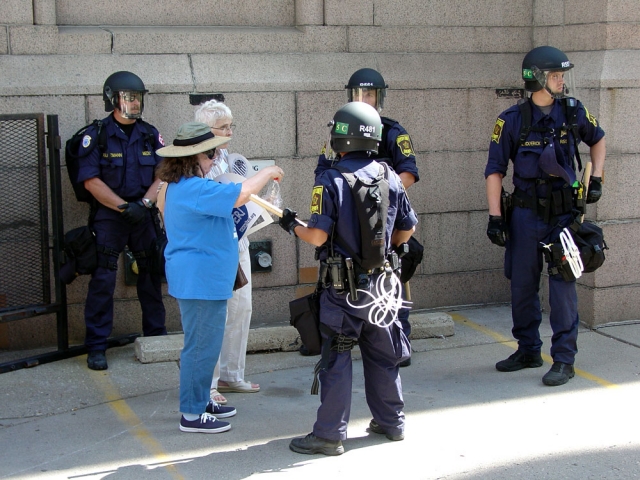 original image (1000x750)
They slipped past a spot where barricades were not bolted to building they were up against.
http://www.indybay.org/newsitems/2008/08/3...
§Wall of Cops to Deal with Onlookers on Outside of Barricaded Area
by dave id Sunday Aug 31st, 2008 9:48 PM 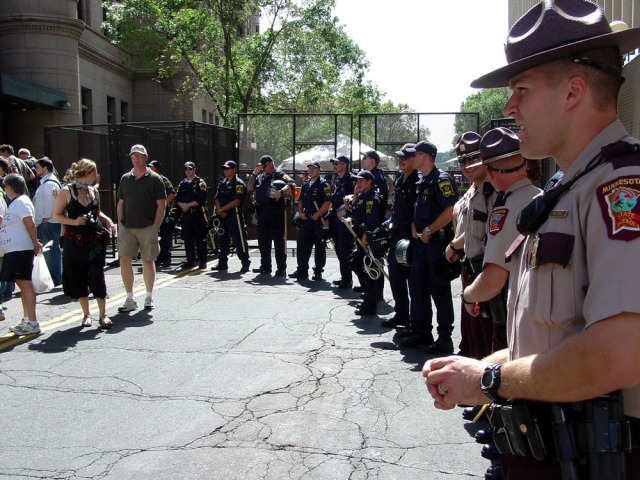 original image (1000x750)
Also, the Minnesota National Guard came by to witness the action, although they just stood around, as most of the cops did, including the riot cops inside of the barricades.
http://www.indybay.org/newsitems/2008/08/3...
§Cops Discussing the Obvious Problems with Their Barriers
by dave id Sunday Aug 31st, 2008 9:48 PM 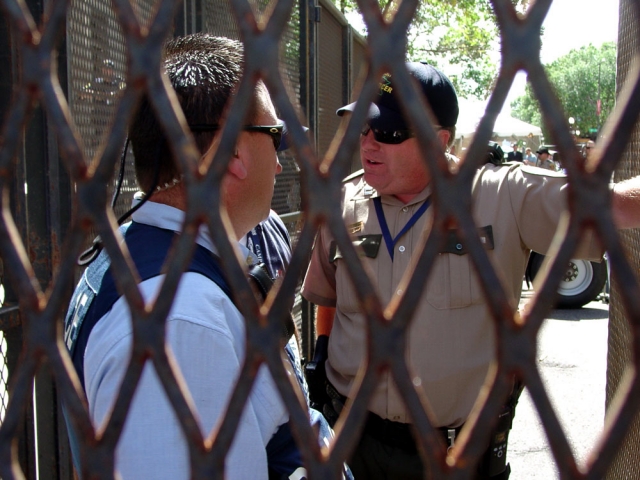 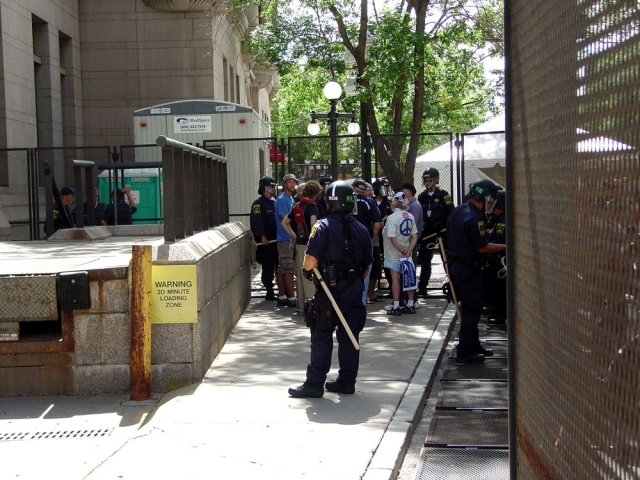 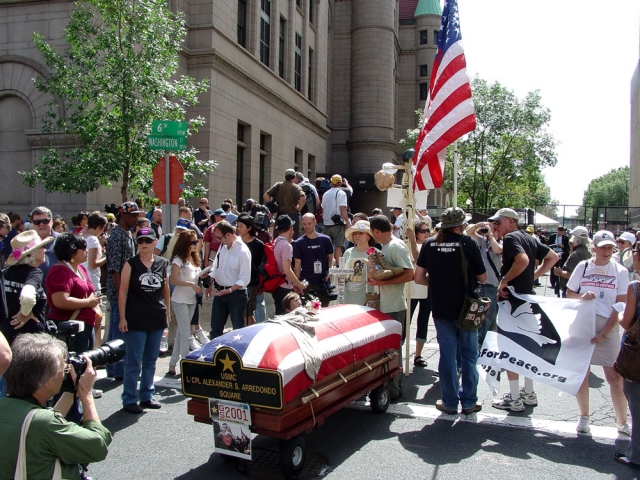 original image (1000x750)
About 15 minutes after this photo was taken, the wall of cops directed all onlookers to move on as barricade breachers were arrested.
http://www.indybay.org/newsitems/2008/08/3...
§Reinforcement Vehicles
by dave id Sunday Aug 31st, 2008 9:48 PM 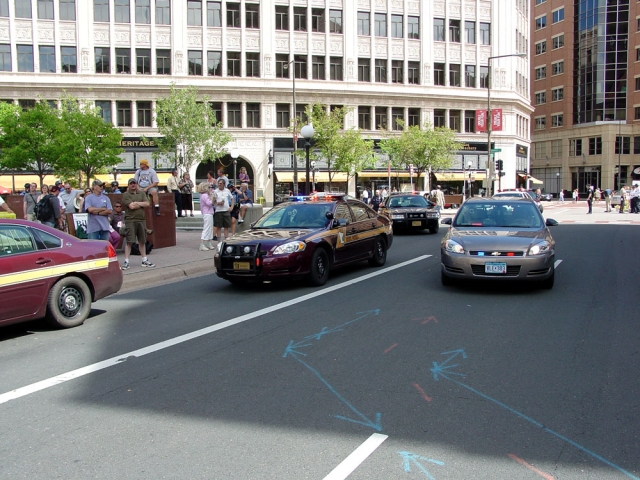 original image (1000x750)
http://www.indybay.org/newsitems/2008/08/3...
Add Your Comments
Support Independent Media
We are 100% volunteer and depend on your participation to sustain our efforts!