by rnc2008 video collective
Independent Media Activists Set to Release Documentary on Political Repression During the 2008 Republican National Convention: Documentary to be Released One Week Before Historic Presidential Election. Watch the trailer here.
Copy the code below to embed this movie into a web page:
Download Video (32.9MB) | Embed Video
FOR IMMEDIATE RELEASE
OCTOBER 27, 2008

Independent Media Activists Set to Release Documentary on Political Repression During the 2008 Republican National Convention: Documentary to be Released One Week Before Historic Presidential Election

Featuring first-person accounts and footage from more than forty cameras on the streets, "Terrorizing Dissent" focuses on the story of dissent suppressed. People charged with "conspiracy to riot in furtherance of terrorism" speak out against the government's campaign to manipulate media coverage and label civil disobedience and community organizing as terrorism.

Cut from hundreds of hours of donated footage, "Terrorizing Dissent: Election Cut" will be released for free on the Internet in HD, FLV and Quicktime formats, under the Creative Commons / CopyLeft license, and its producers encourage everyone to share this important film.


The first screenings of the film will be offered in both Minneapolis, MN and Oakland, CA as benefits for legal support:

Another Minneapolis-area screening on Thursday, October 30th is also being scheduled.


Visit http://www.terrorizingdissent.org to view the trailer and sign up for updates on the project.

Glass Bead Collective (http://www.glassbeadcollective), based in New York City, brings together individuals from diverse academic and professional backgrounds including video art, film, theater, architecture, photography, music, mathematics, fine arts and philosophy to create works which re-contextualize culture and the world in which we find ourselves today.

Twin Cities Indymedia (http://tc.indymedia.org) is the local chapter of the international Indymedia network, a collective of independent media organizations and hundreds of journalists offering grassroots, non-corporate coverage. Indymedia is a democratic media outlet for the creation of radical, accurate, and passionate tellings of truth. Twin Cities Indymedia provided up-to-the-minute coverage of the St. Paul's Republican National Convention with news and media straight from the streets. As an entirely volunteer-run organization, the Tech Collective handles the Web platform, and the passionate observers of the Editorial Collective write stories and fend off spam. TC Indymedia plans to organize a new video project collective as an extension of the work behind producing "Terrorizing Dissent." 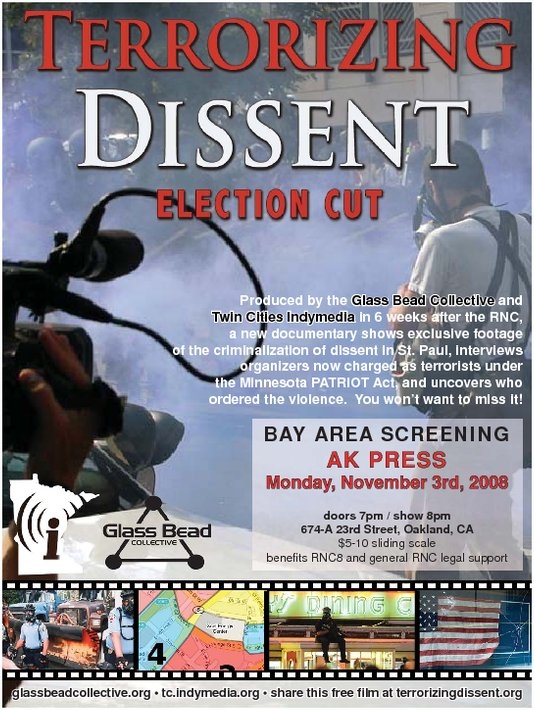 END_OF_DOCUMENT_TOKEN_TO_BE_REPLACED
Add Your Comments
Latest Comments
Listed below are the latest comments about this post.
These comments are submitted anonymously by website visitors.
TITLE
AUTHOR
DATE
the RNC8
cp
Support Independent Media
We are 100% volunteer and depend on your participation to sustain our efforts!