by dave id
Impact, with the Tin Can Comms Collective, provided logistical communications support for the RNC demonstrations of September 2008 in St. Paul. As local authorities did in conjunction with a number of federal agencies against other activists at the time, from independent media journalists to I-Witness Video to the RNC Welcoming Committee, the working space of the Tin Can Comms collective was pre-emptively raided. Everyone inside was arrested on a flimsy pretext, detained for days, and later released without charge, in effect illegally taking them out of the game.

In this video, Impact speaks of the work Tin Can was doing to facilitate communications in the streets through text messages, his arrest on September 1st, the first day of the Republican National Convention, conditions while being detained, and his release two days later as a jail solidarity effort was under way in front of the Ramsey County Jail. Targeting infrastructure and public relations seemed to be the goals of police.
Copy the code below to embed this movie into a web page:
Download Video (31.3MB) | Embed Video
(video 11:30)

Today, the RNC8 still face felony terrorism charges for their participation with the RNC Welcoming Committee in support of civil disobedience demonstrations against the Republican Convention. http://rnc8.org

For more coverage of the RNC, see:
END_OF_DOCUMENT_TOKEN_TO_BE_REPLACED
§RNC Live zine documents events as they were reported at Twin Cities IMC
by dave id 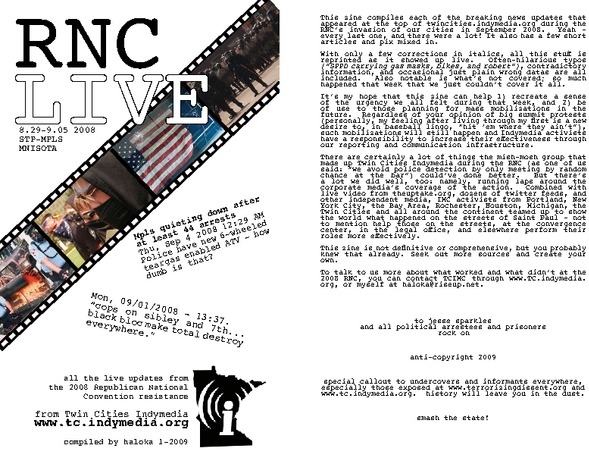 Download PDF (1.4MB)
This includes Tin Can Comms Collective's text messages that were posted live to the Twin Cities IMC site. After Tin Can was raided, and until members were released, TC-IMC handled live text message communications for the convention. http://twincities.indymedia.org/

END_OF_DOCUMENT_TOKEN_TO_BE_REPLACED
Add Your Comments
Latest Comments
Listed below are the latest comments about this post.
These comments are submitted anonymously by website visitors.
TITLE
AUTHOR
DATE
great!
b
Support Independent Media
We are 100% volunteer and depend on your participation to sustain our efforts!