Add an Event
Newswire
Calendar
Features
Home
Donate
From the Open-Publishing Calendar
From the Open-Publishing Newswire
Indybay Feature
Publish to Newswire
Add an Event
Related Categories: U.S. | Government & Elections | Media Activism & Independent Media | Police State & Prisons
Minneapolis Police Target and Obstruct Independent Coverage in the Days Leading Up to RNC
by via I-Witness Video
Monday Sep 1st, 2008 7:42 AM
Repeated attacks on the civil liberties of independent press and activists before and during the election process emerge as a pattern 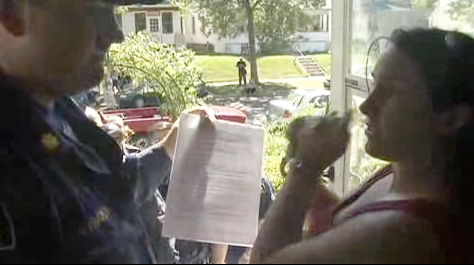 MINNEAPOLIS, Minnesota (August 30, 2008) – FBI and Minneapolis police continue attacks on independent journalists in the days leading up to the Republican National Convention, obstructing coverage of important concurrent events. On Saturday morning an FBI officer and a chief deputy from the Douglas County Sheriff’s dept. along with approximately 30 St. Paul police officers bearing firearms, tasers, pepper spray and at least one AR-15 surrounded a house where members of I-Witness Video Collective and journalist Elizabeth Press from Democracy Now were meeting. National Lawyer’s Guild Legal Observer Sarah Coffey was detained in handcuffs outside the building while acting as a liaison with the police. Occupants of the building did not consent to a search and were forced to lock themselves in the building. At approximately 3:00 p.m. (CDT) police officers tried to serve a warrant that had the wrong address. After being denied entry they stormed the building through the attic by gaining access to an adjacent property. The warrant covered all of journalistic equipment including privileged notes, computers, cameras, video tapes and communication devices. People inside were forcefully detained, photographed and police made a record of their names and addresses. After a 45 minute search the police released all detainees and left without seizing any of the equipment. Five other members of I-Witness video who were not present at the house were also simultaneously detained. Three of them detained as they were riding their bicycles a mile away from the scene of the search and the other two as they were driving in a car. The three-hour detainment stopped the media group from documenting three other raids happening simultaneously against activist groups in Minneapolis and St Paul.

This follows an incident from earlier this week when three members of Glass Bead Collective were illegally detained and had their equipment and notes confiscated by the Minneapolis police.

###
§I-Witness Video for Reposting Via Indybay Embed Tag
by @ Monday Sep 1st, 2008 9:55 AM
Copy the code below to embed this movie into a web page:
Download Video (29.2MB) | Embed Video
Here's a decent sized MP4 (29mb) for download and a non-corporate flash version for embedding elsewhere.
Add Your Comments
Support Independent Media
We are 100% volunteer and depend on your participation to sustain our efforts!