Add an Event
Newswire
Calendar
Features
Home
Donate
From the Open-Publishing Calendar
From the Open-Publishing Newswire
Indybay Feature
Publish to Newswire
Add an Event
Related Categories: Santa Cruz Indymedia | U.S. | Global Justice & Anti-Capitalism | Government & Elections | Police State & Prisons
The Police State Flexes It's Muscle in St. Paul During the RNC
by ~Bradley (bradley [at] riseup.net)
Wednesday Sep 3rd, 2008 2:00 AM
Decentralized, unpermitted protests took place throughout the streets of downtown St. Paul, Minnesota on September 1st to mark the start of the Republican National Convention (RNC). Following the permitted demonstration organized by The Coalition to March on the RNC and Stop the War, various items were pulled into the streets, some corporations had their windows broken, and people danced without permission. There were mass arrests by the police who deployed a wide range of weaponry, including concussion grenades, tear gas, pepper spray, batons, charging horses and hard rubber bullets. 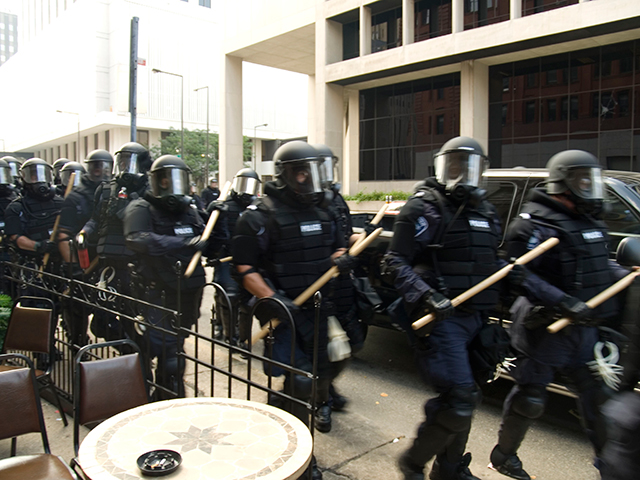 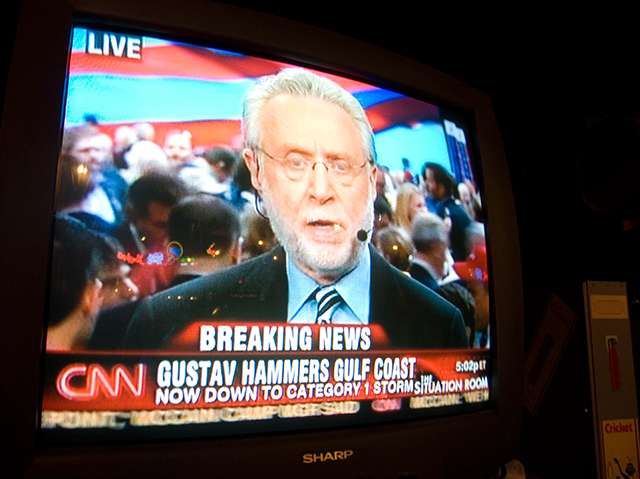 Radical Response to Hurricane Gustav and the RNC: From TC Indymedia and the Indymedia network
http://tc.indymedia.org/2008/sep/radical-response-hurricane-gustav-and-rnc-tc-indymedia-and-indymedia-network 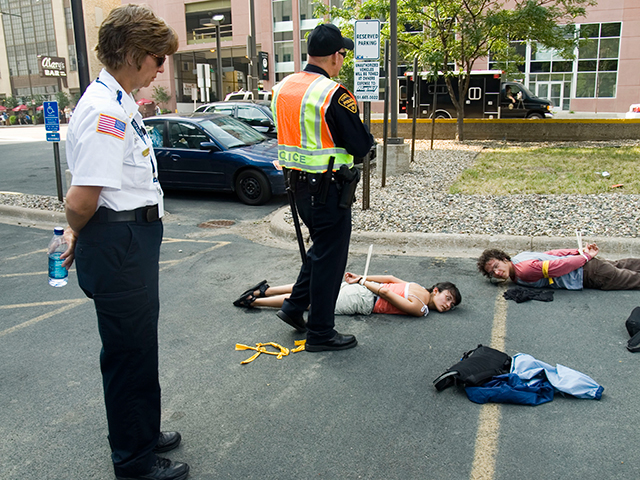 These folks were put in plastic hand cuffs (zip ties) and then left face down in the street.

Neither the cop from Tucson, AZ nor the woman in the white shirt (not sure what her role was) knew why the two people were cuffed and left by other police.
§Mass Arrest at Jackson and Seventh
by ~Bradley Wednesday Sep 3rd, 2008 2:00 AM 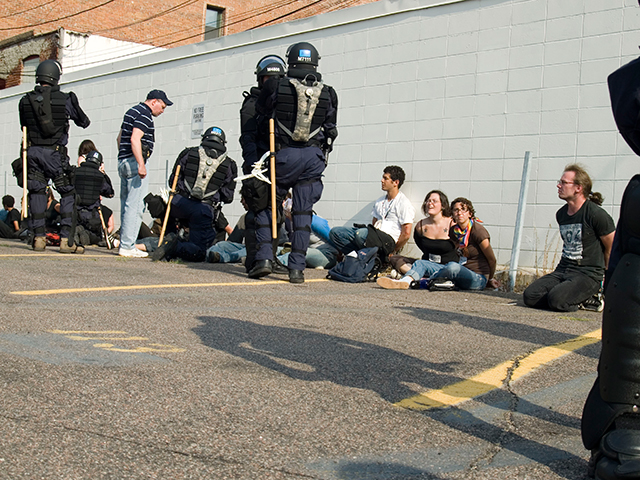 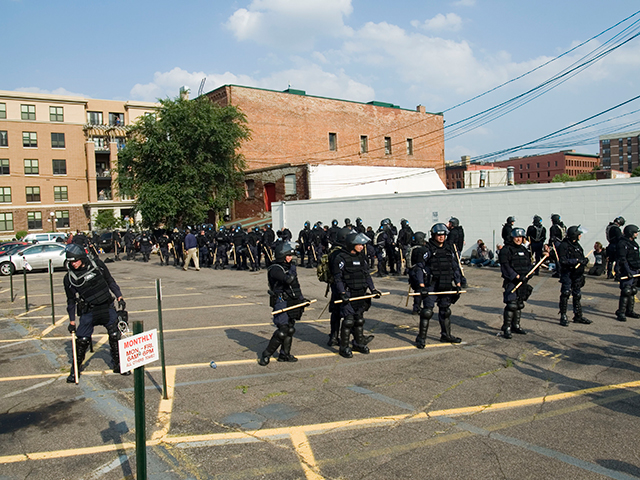 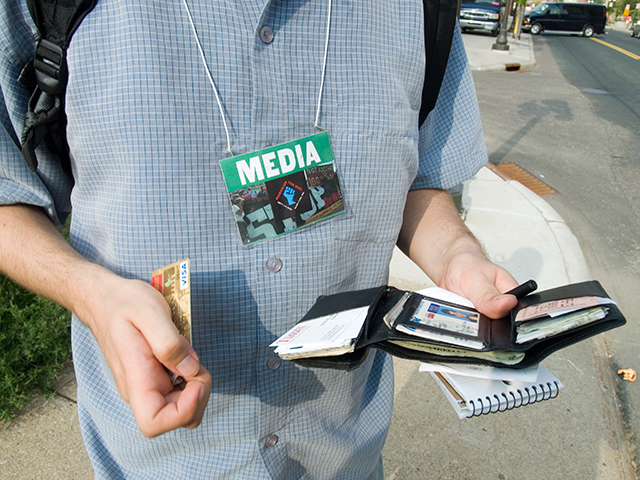 Steve, a journalist with the Carbondale Times, was arrested at Jackson and 7th along with so many other people that did absolutely nothing wrong. Reporters for Indymedia and Democracy Now! were arrested with charges pending, however Steve was released from the mass arrest after saying he was a journalist and showing three forms of identification.
§Police Photographer "for today"
by ~Bradley Wednesday Sep 3rd, 2008 2:00 AM 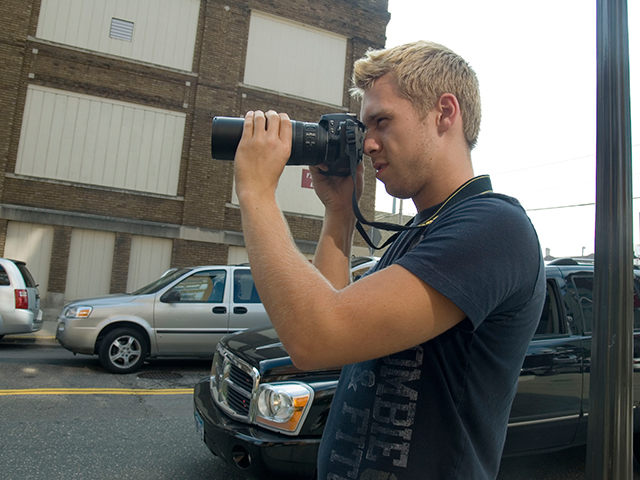 I watched this person exit the driver's seat of the unmarked police SUV pictured above and below.

I asked him if he was a police photographer and he replied, "I am for today."
§Police Photographer "for today"
by ~Bradley Wednesday Sep 3rd, 2008 2:00 AM 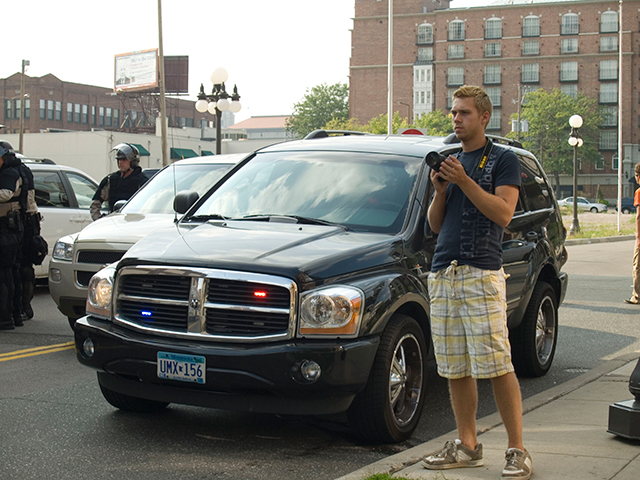 I wonder where else this person has been taking photos. 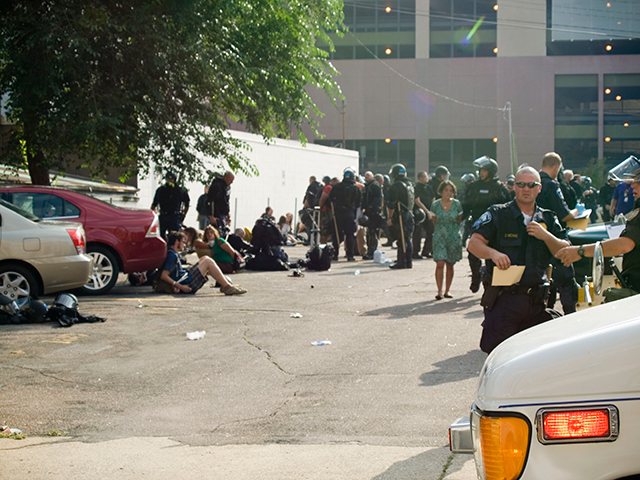 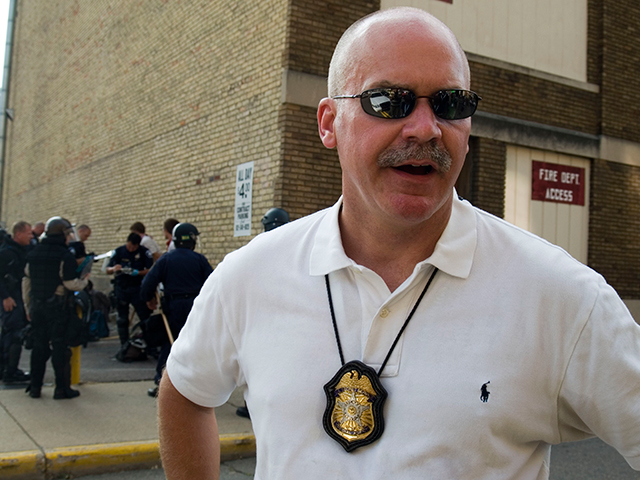 This guy from the Secret Service forced people to stand behind the double yellow lines on Temperance St.
§Ramsey County Sheriff
by ~Bradley Wednesday Sep 3rd, 2008 2:00 AM 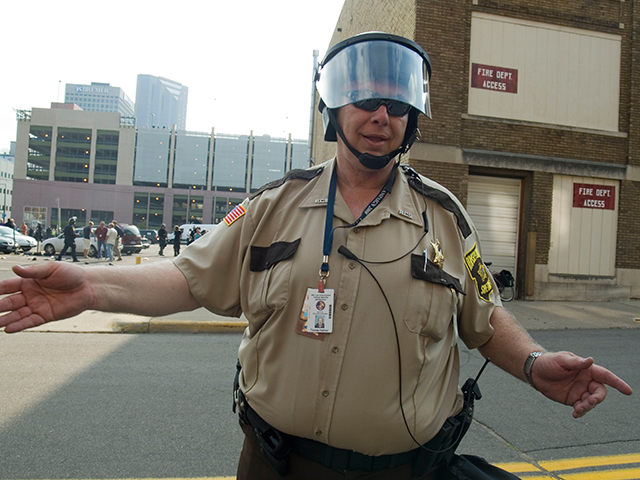 Right after we backed up to the double yellow lines, as requested by the Secret Service agent, this Ramsey County Sheriff forced us onto the sidewalk.

Later in the day, an officer from the Department of Natural Resources who was working security in St. Paul told me that there were hundreds of police agencies in the Twin Cities during the RNC. Since I arrived in the Twin Cities, the police state has been operating unconstitutionally and making up arbitrary rules. Miscommunication between police has been frequent and often puts people into very dangerous situations.
§Processing
by ~Bradley Wednesday Sep 3rd, 2008 2:00 AM 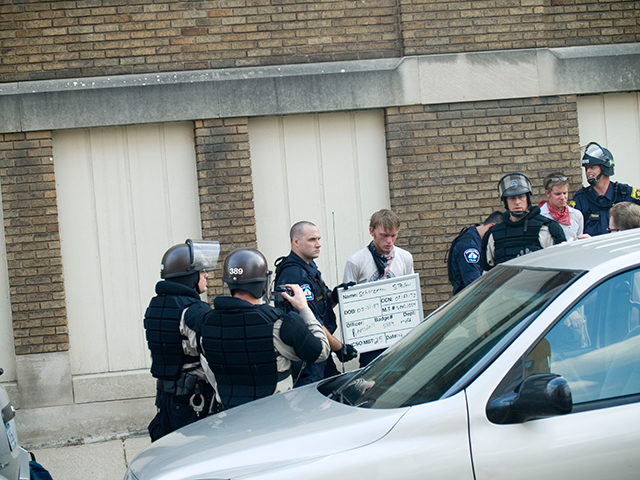 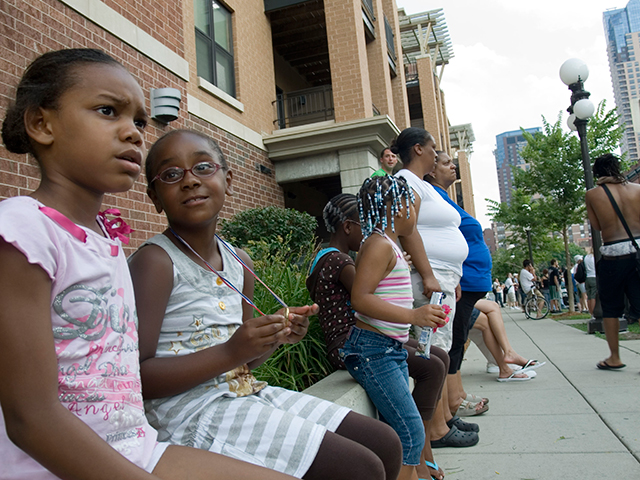 Watching the injustice in the parking lot across the street from the Sibley Court Apartments.
§7th and Jackson
by ~Bradley Wednesday Sep 3rd, 2008 2:00 AM 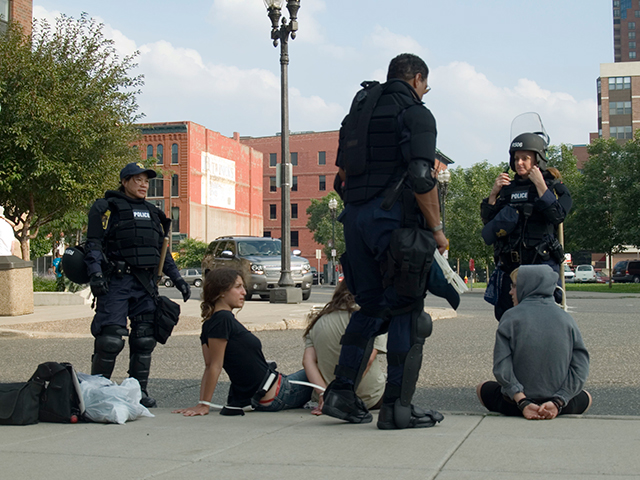 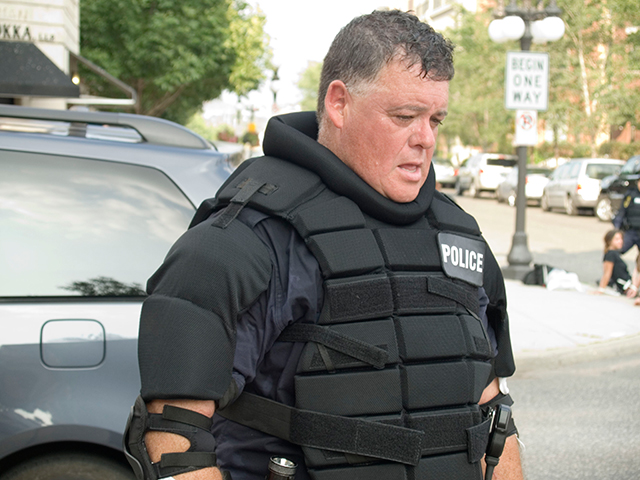 I was talking with this cop and inquiring about the systematic violation of civil liberties that I was witnessing on the part of the police. His smirky response to me was, "Call 911"
§7th Street
by ~Bradley Wednesday Sep 3rd, 2008 2:00 AM 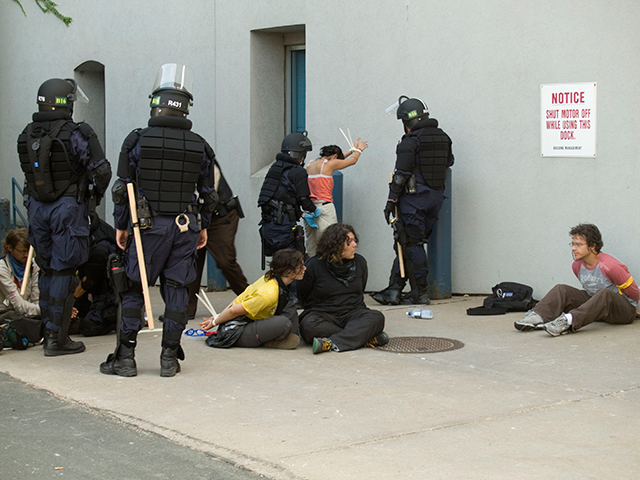 First Aid medics and other innocent people are cuffed and searched. The two folks against the wall and the same people that were face down in the street a hour earlier, pictured above in the photo called "Cuffed and Left"
§Robert and 7th
by ~Bradley Wednesday Sep 3rd, 2008 2:00 AM 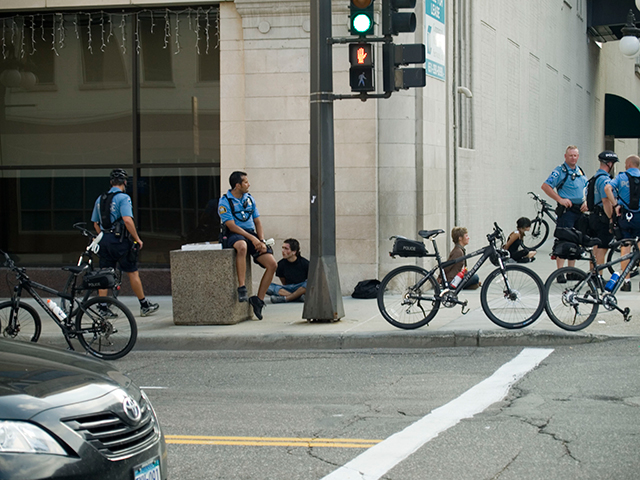 More folks are cuffed and against a wall
§Delegates and a Barricade
by ~Bradley Wednesday Sep 3rd, 2008 2:00 AM 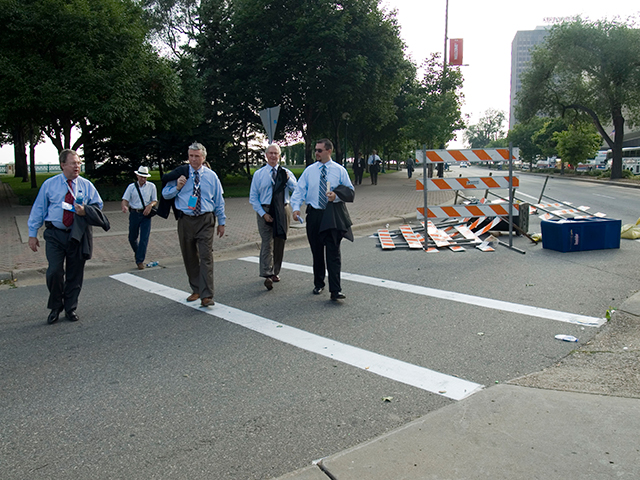 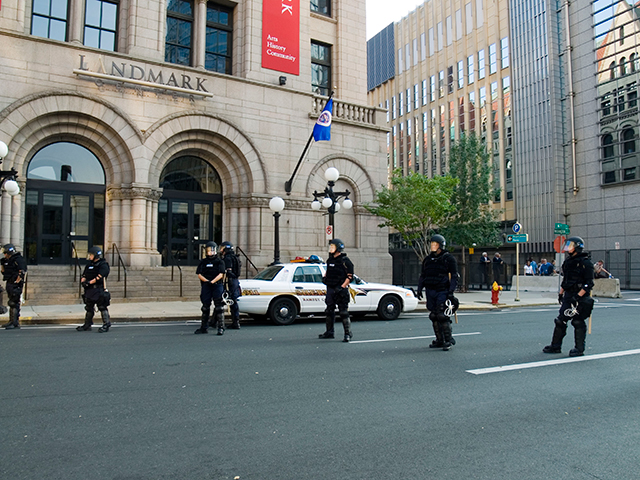 It was not easy walking around downtown St. Paul because so many streets were blocked off. Many locals were particularly angry when the police physically prevented them from getting to their homes.
§Minnesota National Guard
by ~Bradley Wednesday Sep 3rd, 2008 2:00 AM 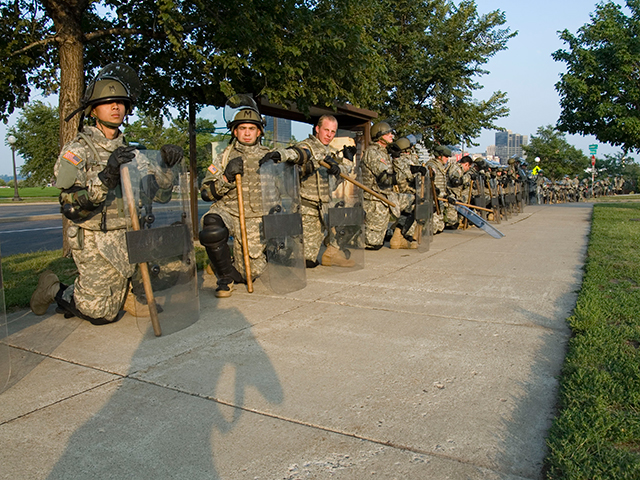 §Unpermitted Dissent in the Streets of St. Paul
by ~Bradley Wednesday Sep 3rd, 2008 3:01 AM
Here is a link to the first portion of these photos:

Unpermitted Dissent in the Streets of St. Paul
http://www.indybay.org/newsitems/2008/09/02/18532400.php
Add Your Comments
LATEST COMMENTS ABOUT THIS ARTICLE
Listed below are the latest comments about this post.
These comments are submitted anonymously by website visitors.