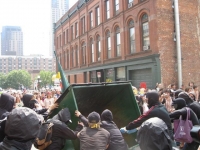 On Tuesday, September 16 at 7:30pm, a reportback from the mobilizations against the political conventions this summer will be held in San Francisco, at Station40 (3030b 16th. Street). Video from the streets will be shown with presentations, and afterwards an open discussion will be held to examine activist strategies, police actions, media, successes, failures, and more.

"As the dust settles around the storm of protests surrounding the Democratic and Republican National Conventions, Bay Area activists who were on the streets of Denver and the Twin Cities are coming together to talk about their experiences -- what strategies were employed, what went right, what went wrong, and where we will go from here?" Event Announcement