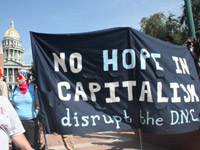 Thursday, 8/28/08: More than 800 people gathered at Rude Park in Denver for an immigrant rights march that descended on the Pepsi Center. Demonstrators held signs that read "Immigrant Rights are Human Rights."

Wednesday, 8/27/08: More than 10,000 demonstrators lined up behind a contingent of 70 Iraq Veterans Against the War as they marched nearly four miles from the Denver Coliseum. The anti-war march started after Rage Against the Machine, The Coup and Flobots gave a free show in support of the veterans. Shortly before the show the anti-DNC convergence space raided by police and two people were arrested. At noon, before the march and the raid, Unconventional Denver held a "No Warming! No Green Capitalism!" re-education rally that brought nearly 400 people outside the doors of Denver's most notorious polluters and DNC supporters. The day ended with a stalemate between the Iraq vets and police in front of the Pepsi Center, followed by a 400-bike strong Critical Mass.

Tuesday, 8/26/08: The Iraq Veterans Against the War orchestrated guerrilla theater in downtown Denver to show the brutality of the U.S. Occupation of Iraq and Afghanistan. The war veterans, dressed in full military gear, staged realistic portrayals of actual interactions between U.S. troops and Iraqi civilians.

Monday, 8/25/08: Activists goal for the day was to crash lavish fund raising parties throughout downtown Denver. Five community organizers from Kansas and Missouri were arrested this morning by the FBI and Denver PD. Late in the day, a police "kettle" operation (whereby police surround, contain, and arrest large numbers of protesters at once) led to about 100 arrests near a delegate meeting in a Denver hotel.

Sunday, 8/24/08: Two pink tanks blasting raucous music and masked protesters took over the downtown of the Mile High City on Sunday on the eve of the Democratic National Convention. Denver's 16th Street Mall — a 16-block pedestrian and public transit corridor in the center of the city — was overrun by an Unconventional Denver orchestrated action at 3 p.m. on Sunday. The day started off with a Recreate '68 morning action that brought out 2,000 people to the corporate gates of the Pepsi Center in the End the Occupation March to protest of the wars in Iraq, Afghanistan, Palestine and other occupations throughout the world. Dead Prez kicked off the march from the Civic Center. World Can't Wait headed the march. Many smaller groups and individuals participated in the Recreate '68 action. Towards the end of the march, a Fox News reporter was surrounded by demonstrators and physically removed from the action. As the day wore on, the Alliance for Real Democracy held a Funk the War march at 2:15 p.m. on the 16th Street Mall in downtown. The event brought out more than 1,000 people, including members of Code Pink and Iraq Veterans Against the War.