Add an Event
Newswire
Calendar
Features
Home
Donate
From the Open-Publishing Calendar
From the Open-Publishing Newswire
Indybay Feature
Publish to Newswire
Add an Event
Related Categories: U.S. | Global Justice & Anti-Capitalism | Government & Elections
Backbone march invaded by antigay men
by reposted photos
Tuesday Aug 26th, 2008 1:24 PM
On the morning of Tuesday August 26, 2008, the Backbone campaign had a permit for a march leaving from Civic Center Park in Denver, and proceeding towards the DNC convention center. Early reports are that some participants in this march were arrested for trying to send away an abrasive anti-gay christian group that entered their group and was engaging in harrassing, invasive behavior. There was some yelling, and people tried to hold signs in front of their signs, and despite the fact that the backbone campaign held the permit, the provokers were given quite a bit of tolerance by police. The police charged someone for pulling a bullhorn cord. 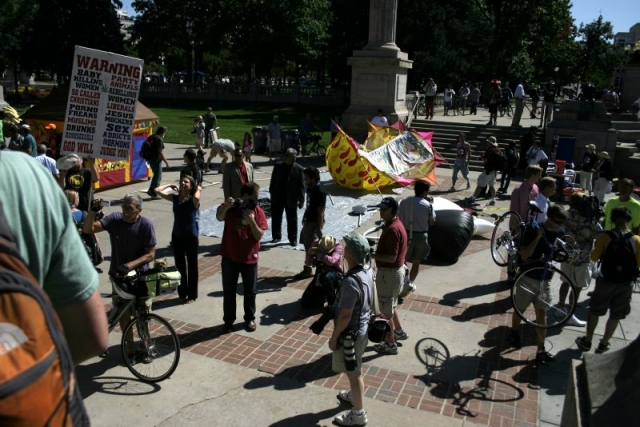 original image (800x534)
The Backbone Campaign tries to encourage democrats to make delivery on their promises in congress, rather than continuing to cave in on issues such as ending Iraq war funding and impeachment.

This set of photos tells a lot of the story behind this invasion by biblical fundamentalists: http://picasaweb.google.com/morry32/DemocraticNationalConventionAugust26thMorning


(quick news summary http://www.examiner.com/a-1555701~2_people_arrested__prompting_protest.html)
Add Your Comments
LATEST COMMENTS ABOUT THIS ARTICLE
Listed below are the latest comments about this post.
These comments are submitted anonymously by website visitors.