UpTake Journalists Corrine McDermid and Oliver Dykstra caught between police and protesters when cops open up with concussion grenades and teargas and chased down the street Watch here: http://the-uptake.groups.theuptake.org/en/videogalleryView/id/695/

Also sound at end was from when St. Paul police officer attempting to drag a protester away, only to get tackled from behind. The officer sprayed a chemical agent all around him but ultimately lost the suspect watch it here:
http://the-uptake.groups.theuptake.org/en/videogalleryView/id/692/ 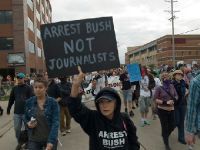 http://popdefectradio.blogspot.com/
Add Your Comments
Support Independent Media
We are 100% volunteer and depend on your participation to sustain our efforts!