Add an Event
Newswire
Calendar
Features
Home
Donate
From the Open-Publishing Calendar
From the Open-Publishing Newswire
Indybay Feature
Publish to Newswire
Add an Event
Related Categories: U.S. | Police State & Prisons
Twin Cities: Criminalize dissent, privatize public space, militarize police response
by nihilix (repost)
Sunday Aug 31st, 2008 8:03 AM
It's gratifying, somewhat, to find people from Glenn Greenwald at Salon to several bloggers at Firedoglake blogging about the creepy police state tactics that are going on here in the Twin Cities on the eve of the Republican National Convention, aka "The Also-Rans." 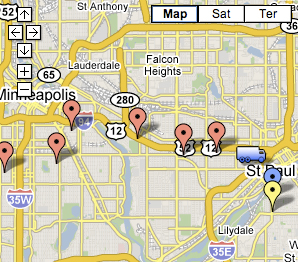 A series of raids has swept across the city (the Uptake has a google map showing the raids) and they all follow the same pattern - a generic warrant (pdf) (sometimes shown or read before the raid, sometimes not), police with guns drawn (sometimes handguns, sometimes assault rifles), lengthy times when people sit around in handcuffs, and then the police go away, generally without making arrests. Then the city code people come by and try to board up the house since there are code violations, like a busted back door. You know, the one that the police just kicked in.

The mantra seems to be - criminalize dissent (particularly 'radical' or 'anarchist' dissent), privatize public spaces (the extensive 'security zone' that is around the convention center) and militarize law enforcement. The raids have generally been coordinated by the Ramsey County Sheriff's office (Saint Paul is in Ramsey County), which is under the aegis of Ramsey County Sheriff Bob Fletcher.

While it's generally hard to determine, Sheriff Fletcher almost certainly sits on the Joint Terrorism Task Force in the Twin Cities area - that inter-agency department that includes police at all levels - federal (the FBI), state, county and city. This explains why the Minneapolis raids were led by Ramsey County, despite the fact that Minneapolis is in Hennepin County.

Now is the time for Sheriff Fletcher to get before the cameras to talk about the buckets of urine these dangerous anarchists were collecting, or the Anarchist Cookbooks or the old tires (for burning). That's because two members of his elite task force were just convicted of stealing thousands of dollars of drug money. As firedoglake's Phoenix Woman puts it

Bob Fletcher is the sheriff of Ramsey County. Bob Fletcher is a Republican from the formerly lily-white St. Paul suburb of Maplewood, which has for decades had an uneasy relationship with its southern neighbor. Bob Fletcher is also on the verge of losing his job, as a long-standing FBI corruption probe that has already taken out two of his buddies is drawing its net around him; he may well feel that he has nothing to lose and everything to gain by using extralegal methods to please his RNC pals.

Excellent time to beat up on some smelly, urine-caching anarcho-hippies!

While I will try to provide you further coverage, I would recommend the following sites for keeping track of things. While we have two corporate papers (the Star Tribune and the Pioneer Press) both tend to take the 'stenographers for the police' route, although the inherent disgust that the Twin Cities has for Republicans means that there are City Council members who will go on record saying how insane all this is. These two towns aren't perfect, but they are pretty liberal.

The main reason I might not be able to blog - I'll be working for KFAI 90.3/106.7 FM, the community radio station in town. Unfortunately, our coverage starts on Monday! So listen to the 6 PM news for my stories on the faith beat.

Twin Cities Indymedia
An explicitly activist media center, the Independent Media Centers were formed to give alternative media types a central location at protests like this. Rising to the occasion quite well.

Twin Cities Daily Planet
The Daily Planet is a 'group blog' of Twin Cities alternative, ethnic, and neighborhood media, which also does independent reporting on it's own. Editor Mary Turck has been doing excellent work.

The Uptake
Progressive street video bloggers. They're doing great work too, and have a video production space.

The Stimulator is a video activist who is producing short clips. Salty language, salty politics.

The legal collective for the activists - Cold Snap - is using a twitter channel.

And feel free to contact local political and media figures. I think that the Gustav-is-coming hullabaloo is intended to shove this story of police repression under the radar. So keep your eyes on the real action, and send good wishes our way.
http://bitchphd.blogspot.com/2008/08/twin-...
Add Your Comments
Support Independent Media
We are 100% volunteer and depend on your participation to sustain our efforts!