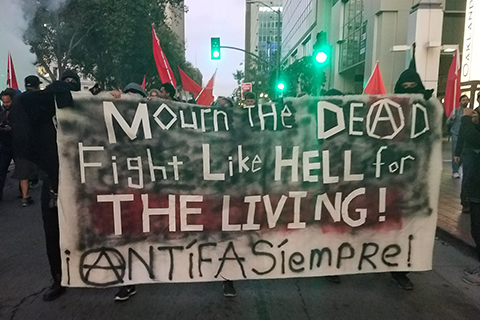 After a fascist mob attacked a small group of UVA student counter-protesters the night before, the Unite the Right rally in Charlottesville, Virginia turned deadly on August 12 when nazi enthusiast James Alex Fields of Ohio deliberately sped his car into a crowd of antifa, killing thirty-two year old anti-racism activist and Charlottesville native Heather Heyer. Nineteen others were injured in the attack, some critically. Separately, other anti-fascists were physically assaulted in the vicinity. Within hours, solidarity demonstrations and vigils sprang up across the country. In Northern California, San Francisco, Oakland, Santa Cruz, Monterery, and other cities gathered to show support for the anti-fascist resistance in Charlottesville.

Monterey: Community joined together and marched to stand against fascism and white supremacy

Protest in Solidarity with Charlottesville |

Santa Cruz: On August 13, fifty to seventy five people demonstrated in front of the Santa Cruz Post office showing their opposition to the KKK.

No to Fascism - Solidarity with Charlottesville Virginia

Candlelight Vigil in Solidarity with Charlottesville

San Francisco: That night, a candlelight vigil was held in Union Square. The following day, approximately 200 hundred people gathered at the corner of 24th and Mission. Hours later hundreds gathered at City Hall to discuss ways to prevent other such outrages from happening here.

Heather Heyer is a Hero: The Bay Area's Response to her Murder |

Emergency Rally in Support of #DefendCville |

Stand Against Nazi Terror in Charlottesville! No Trump, No KKK, No Fascist USA |

Oakland: Hundreds of protesters marched and shut down I-580 that night. The following afternoon, a rally was held in Latham Square.

Oakland Marches in Solidarity with Charlottesville, Shuts Down 580 Freeway (8/12) |

From Oakland to Charlottesville: Love & Solidarity (8/12) |

Say No to Hate in the Bay: Solidarity with Charlottesville: Video, Photos & Full Audio (8/13) |

Say No to Hate in the Bay |

Emergency Demo: Charlottesville, We Got Your Back

One Dead in Charlottesville: Why the Right Can Kill Us Now |