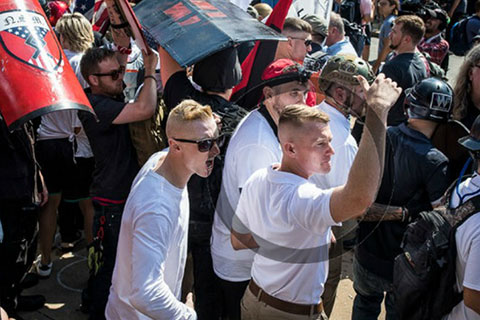 On August 11, over 500 neo-Nazis attacked a group of young students and community members at the University of Virginia. The neo-Nazis had gathered for a nighttime march before the now infamous “Unite the Right” rally in Charlottesville that resulted in the death of 32-year-old Heather Heyer and injured close to 20 people.

California Statue University (CSU) Stanislaus student Nathan Damigo, the neo-Nazi leader of Identity Evropa was not only there, he was a key organizer of the deadly rally. Pictures of his "troops" proudly wearing the Identity Evropa logo and giving Hitler salutes have now gone viral across the internet. Furthermore, Damigo was arrested on misdemeanor charges in Charlottesville along with several other white supremacists.

Back in April, Nathan Damigo first came into the public spotlight for punching a female protester at a demonstration attended by neo-Nazis in Berkeley. After punching the woman twice, Damigo quickly ran back into the crowd. The video went viral online and spawned an outcry and protests to have Damigo expelled from CSU Stanislaus.

In the face of calls to have Damigo removed however, the University administration simply stated the Berkeley police were looking into his conduct and that they would defer to them. Charges were never filed against Damigo — despite the evidence. Whether in denial, covering for him, or simply wanting to avoid the spotlight, CSU Stanislaus did nothing and the problem only continued to grow. Now someone is dead.

Related Features: Charlottesville, We Got Your Back | White Supremacist Nathan Damigo Exposed