Add an Event
Newswire
Calendar
Features
Home
Donate
From the Open-Publishing Calendar
From the Open-Publishing Newswire
Indybay Feature
Publish to Newswire
Add an Event
Related Categories: Central Valley | U.S. | Anti-War | Education & Student Activism | Global Justice & Anti-Capitalism | Racial Justice
Charilyn Damigo: Stop Financially Supporting and Housing your neo-Nazi Son Nathan
by Veterans Against Hate
Wednesday Aug 16th, 2017 2:06 PM
As Veterans Against Hate and friends and family of people who served fighting the Nazis in World War II, we are disgusted that Nathan Damigo continues to attend a public institution like CSU Stanislaus that we all pay for with our taxes. His mother also continues to milk his time served overseas in various Veterans groups. We call on everyone, especially Veterans, to put pressure on Nathan Damigo's mother, Charilyn Damigo, and demand that she kick him out of her home. By giving him a place to live and free money, she is enabling and allowing him to organize acts of neo-Nazi terror. This must end! 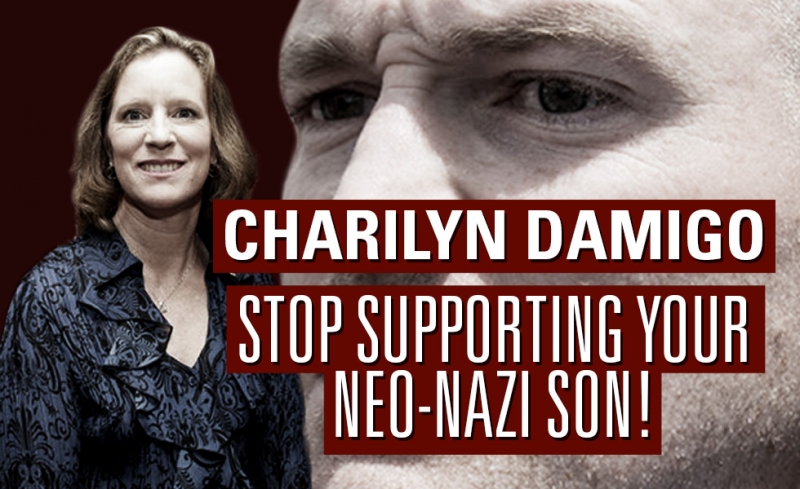 original image (980x600)
It is widely known that Nathan Damigo, the violent neo-Nazi leader of Identity Evropa lives with and is financially supported by his family in their compound in Oakdale, CA. Prior to and since Nathan’s release from prison over the racist armed robbery of a middle eastern cab driver, Charilyn has worked around the clock to help her son launch and lead his neo-Nazi organization out of their home.

Despite her son playing a central role in organizing and leading fascist rallies in Berkeley and Charlottesville which have brought in neo-Nazis from all over the country and have resulted in great violence, injury, and even the loss of Heather Heyer's life, Charilyn Damigo’s support for her son remains unwavering. By providing Nathan with continued material support in the face of his violence, racism, misogyny and neo-Nazi activism, Charilyn Damigo and the rest of his family have effectively chosen to side with fascism and white supremacy against the community. What’s clear is that it would be impossible for a neo-Nazi former convict without a job like Nathan to fly around the country and work on neo-Nazi activism full-time without the direct support of his family.

We demand that Charilyn Damigo and the rest of his family immediately cease all financial and housing support for Nathan Damigo, or accept that they will be considered part of his neo-Nazi organization and an immediate threat to the community and people around the country.

We call on those outraged by these acts of aggression to express their disapproval by contacting organizations in which Charilyn Damigo is a leading member:

Mid-Cal Blue Star Moms
Charilyn Damigo - Chapter President
midcalbluestarmoms [at] gmail.com
Office Number: (209) 336-3221
Add Your Comments
LATEST COMMENTS ABOUT THIS ARTICLE
Listed below are the latest comments about this post.
These comments are submitted anonymously by website visitors.