Today, in Charlottesville, Virginia, participants in a fascist rally did what they have been threatening to do for a long time, driving a car into a crowd and murdering at least one person. 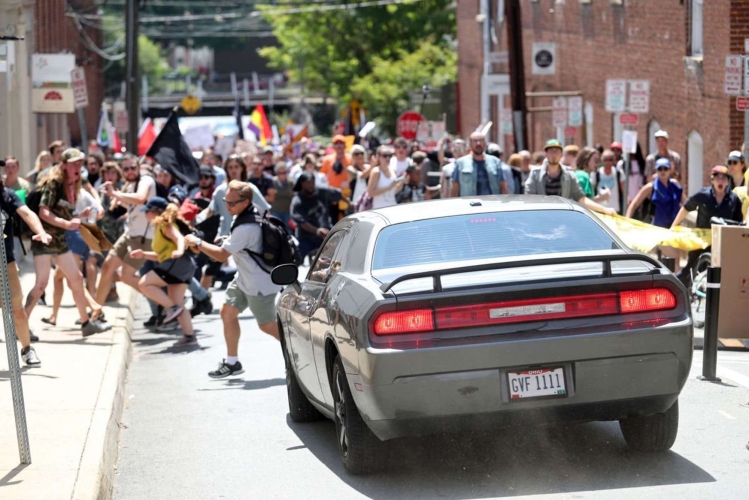 News coverage of Nazi driving a car into a crowd.

We are not surprised.

At Standing Rock in November, police nearly blew off the arm of 21-year-old Sophia Wilanksy with a concussion grenade.

The North Dakota legislature responded not by condemning police violence, but by introducing a bill that would make it legal for drivers to run over protestors.

At an anti-fascist demonstration in Seattle in January, coinciding with Trump’s inauguration, an alt-right assaulter shot Hex, an unarmed anti-fascist protestor and IWW member, in the stomach, sending him to the hospital for weeks. Police initially responded by declining to charge the shooter with a crime, while continuing to condemn and repress anti-fascist demonstrators.

After the Seattle shooting, we wrote that the alt-right “is actively working to create momentum for a fascist movement that will not stop short of murder.”

Today’s murder of an anti-fascist protester is the first to take place during a demonstration. It is assuredly not the last.

Nazi driving a car into a crowd, rear angle.

When the state sends the message that both police and other totalitarians can freely attack and injure those who stand up against racism and injustice, no one should be surprised when that continues to happen.

When the state makes moves to legalize murder of protestors by vehicle, no one should be surprised when the alt-right takes up their invitation.

Meanwhile, the state moves to use this tragedy to consolidate its position. Trump condemned hatred and bigotry “on many sides”—deliberately obscuring who perpetrates the violence and who suffers it, and what distinguishes the values of anti-fascists from the hatred of fascists. Melania Trump reminds us that “no good comes from violence”—again, equalizing anti-fascist militancy with fascist murder—while her husband brings the world closer to the brink of nuclear holocaust than it has been for generations.

Nazi driving a car into a crowd, side angle.

And as our friends lie bleeding in the streets and cold in the morgue, as unapologetic neo-Nazi violence escalates to a level not seen in decades, Charlottesville Mayor Mike Signer tells us to “go home.” He cannot bring himself to say, “A neo-Nazi murdered someone fighting against white supremacy while I stood and did nothing.” So he diplomatically mentions that “a life was lost”—like a misplaced set of keys, rather than a horrific and deliberate act of racist violence.

The discourse of “law and order” functions the same way, whether from the mouths of liberals like Mayor Signer or authority-worshipping Blue Lives Matter zealots. It is intended to play on our fears of violence and chaos to convince us that the only alternative is to accept the economic, political, and racial status quo, defended by ever-escalating control and surveillance.

But we have to realize that their laws and their order are precisely what produced this situation—a situation in which pipeline company profits are worth more than the lives of water protectors, in which cops murder black men with impunity, in which torch-wielding Nazis can murder those who organize to halt their racist agenda.

Nazi driving a car into a crowd, aftermath.

We must identify the forces underlying their laws and their order—white supremacy, patriarchy, policing, capitalism, and the state. We have to work together to keep ourselves safe and reimagine the world without them.

No, we will not go home. We will not forget. And if we can ever forgive, it will only be when we have ensured that no policeman or fascist will ever again be able to cause the slightest bit of harm to any living thing.

See you in the streets. 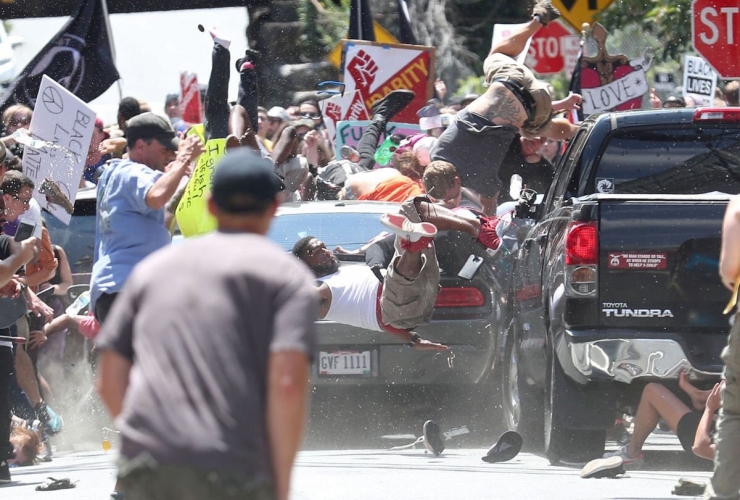 original image (1200x810)
https://crimethinc.com/2017/08/12/one-dead...
Add Your Comments
Support Independent Media
We are 100% volunteer and depend on your participation to sustain our efforts!