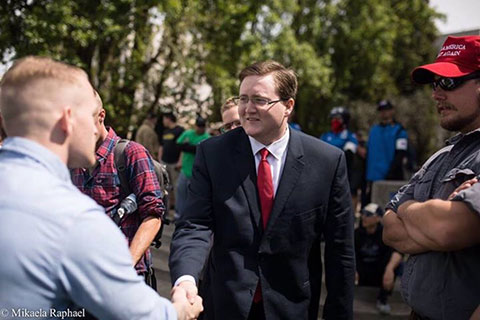 On April 15, students, anti-racists, anti-fascists, and other residents of the Bay Area clashed in the streets of Berkeley against an array of organized white supremacist and far-right forces. Trump supporters openly carried anti-Semitic signs, fascist symbols, and raised their arms in sieg heil Nazi salutes. Unlike most events and actions the far-right has organized in recent past, this time members of the Right were able to take the streets in a city regarded as a leftist stronghold. Bolstered by what they view as a success, the far-right is now bragging that if it can take over Berkeley, it can do the same in any city.

Police had stated the day before that they would search people coming into the park for weapons and other items that could be used for rioting, however for the most part, police failed to do so. Law enforcement also set up plastic barriers in the park that gave the Trump supporters access to a stage area, in effect protecting them from counter-demonstrators and enforcing a permit, even though one was never obtained.

As the day wore on, street fights continued, and spilled into downtown Berkeley. Meanwhile, much of the Left focused on marches around Trump's tax returns, as the media played up fears of general violence while glossing over the fascist nature of the rally itself.

Antifascists state, "This is not simply a matter of pro-Trump vs. anti-Trump. There are committed racists and fascists trying to organize in our cities and our hometowns, in our neighborhoods and at our schools. It is imperative that we come together in our communities, in strength and solidarity, to put an end to their agendas."

Confirmed: Jack Palkovic, BCR and Nathan Damigo Openly Embrace at White Nationalist Rally | Tactical Suggestions for Future Anti-Fascism Considerations | A Medic’s Report from the Streets of Berkeley on April 15 | Mace, Gas, and Blood: A Report Back from Berkeley |

See Also: Defend Auburn, Alabama Against the White Power Invasion on April 18th | If Ann Coulter Still Goes to Berkeley After Being Canned, Fascist Nathan Damingo Vows to Be There

Related Features: Cops and Klan, Hand in Hand: April 15 in Berkeley | Shut Down the Alt-Right Rally on April 15 | Berkeley Chased Milo Out of Town, Shining National Spotlight on "Alt-Right" Hero