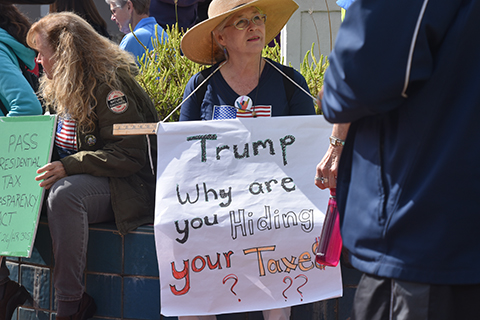 During the 2016 presidential campaign, Donald Trump said he would release his taxes — a customary sign of financial transparency for US presidents since Richard Nixon — but that he could not do so until a supposed IRS audit concluded. To this day, Trump continues to refuse to release his tax returns despite mounting questions regarding conflicts of interest and how much he might be beholden to those representing foreign powers such as Russian oligarchs. A major agenda item Trump has announced as president is an overhaul of the tax code, yet without his tax returns being public, no one would know how Trump might benefit financially from changes to US tax law.

Protesters gathered in over 150 cities on April 15, the traditional tax filing deadline, to demand that Trump release his taxes. In Northern California, Tax Day protests were held in Santa Cruz, Palo Alto, San Francisco, Walnut Creek, Sacramento, Santa Rosa, Ukiah, and other cities. The call for nationwide protests to seek Trump's returns was made by the Indivisible Project, an anti-Trump coalition organized by former congressional staffers.

In Santa Cruz, more than 1200 people took part in a march that began at city hall, went downtown, and ended at San Lorenzo Park. Palo Alto's traditional Tax Day protests against military spending vibrated the city's downtown in a bigger way than usual this year. Rallies rocked in both of Palo Alto's large plazas and a march afterwards swung by the Apple store on University Ave. Some of the demonstrators sang songs in front of the store, then entered the establishment with their demand: high-tech firms, stop donating to the Republican party now!