Add an Event
Newswire
Calendar
Features
Home
Donate
From the Open-Publishing Calendar
From the Open-Publishing Newswire
Indybay Feature
Publish to Newswire
Add an Event
Related Categories: Peninsula | Anti-War | Government & Elections
Tax Day Protest in Palo Alto Targets Apple Too
by Action League
Sunday Apr 16th, 2017 8:31 PM
Palo Alto's traditional Tax Day protests against military spending vibrated the city's downtown in a bigger way than usual this year. Rallies rocked in both of Palo Alto's large plazas and a march afterwards swung by the Apple store on University Ave. Some of the demonstrators sang songs in front of the store, then entered the establishment with their demand: hi tech firms, stop donating to the Republican party now! 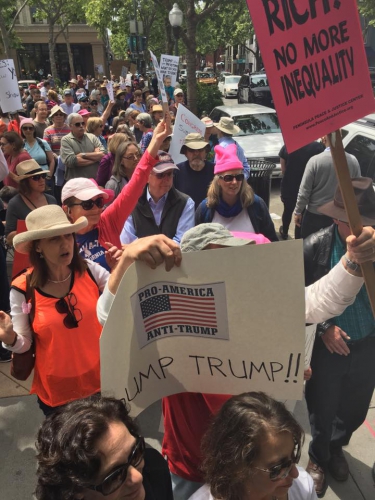 original image (720x960)
Palo Alto's traditional Tax Day protests against military spending vibrated the city's downtown in a bigger way than usual this year. Rallies rocked in both of Palo Alto's large plazas with a march afterwards that swung by the Apple store. Protesters stopped for over an hour in front of the store and then went inside. There they lambasted hi tech firms, including Apple, for supporting the Republican party.

This year's protest was against Trump's refusal to release his tax returns as well as his Pentagon-spending increase. Demonstrators said his unauthorized and illegal acts of war are drawing us closer to World War III, and his lack of transparency about his taxes is indication that he has a lot to hide.

The Raging Grannies led the protest in front of the Apple store, then led demonstrators inside the store. In song they asked why Tim Cook contributed money to Speaker Ryan and demanded that the corporation not betray principles of justice. Employees were encouraged to sign a petition sponsored by the group Unseat.
https://www.facebook.com/unseat/
§Chicken don
by Action League Sunday Apr 16th, 2017 8:31 PM 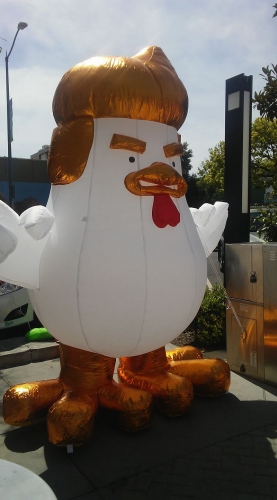 original image (800x1440)
Sounds like a Japanese dish with chicken and rice in a bowl. But it means Don(ald) Trump is too chicken to show his taxes. This was featured item in rally at Lytton Plaza. In this rally alone there were over 400 people. More people participated in a rally in MLK Jr. Plaza.
§Raging Grannies and other protesters go inside the Apple store on University Ave
by Action League Sunday Apr 16th, 2017 8:31 PM 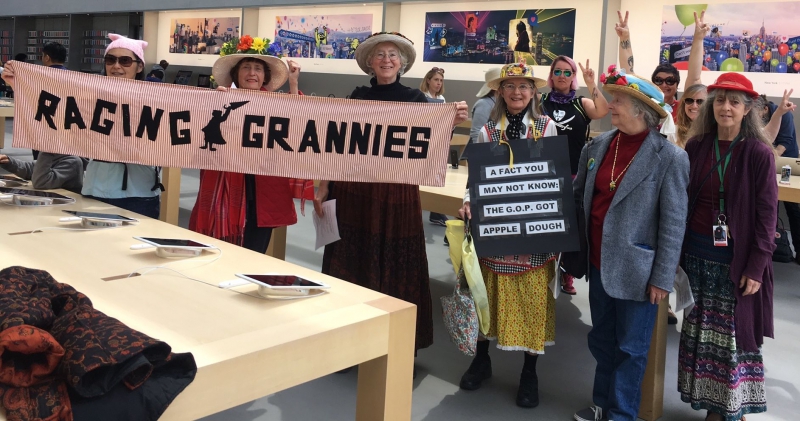 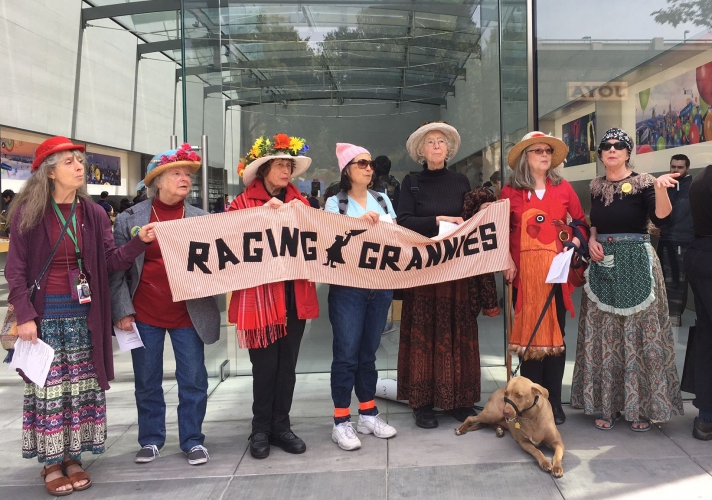 original image (1642x1153)
Add Your Comments
LATEST COMMENTS ABOUT THIS ARTICLE
Listed below are the latest comments about this post.
These comments are submitted anonymously by website visitors.