original image (1400x502)
Donald Trump is the biggest popular vote loser in history to ever to call himself President-Elect. In spite of the fact that he has no mandate, he will attempt to use his congressional majority to reshape America in his own racist, authoritarian, and corrupt image. If progressives are going to stop this, we must stand indivisibly opposed to Trump and the members of Congress who would do his bidding. Together, we have the power to resist - and we have the power to win.

We know this because we’ve seen it before. The authors of this guide are former congressional staffers who witnessed the rise of the Tea Party. We saw these activists take on a popular president with a mandate for change and a supermajority in Congress. We saw them organize locally and convince their own members of Congress to reject President Obama’s agenda. Their ideas were wrong, cruel, and tinged with racism - and they won.

We believe that protecting our values and neighbors will require mounting a similar resistance to the Trump agenda -- but a resistance built on the values of inclusion, tolerance, and fairness. Trump is not popular. He does not have a mandate. He does not have large congressional margins. If a small minority in the Tea Party can stop President Barack Obama, then we the majority can stop a petty tyrant named Trump.

To this end, the following chapters offer a step-by-step guide for individuals, groups, and organizations looking to replicate the Tea Party’s success in getting Congress to listen to a small, vocal, dedicated group of constituents. The guide is intended to be equally useful for stiffening Democratic spines and weakening pro-Trump Republican resolve.

We believe that the next four years depend on citizens across the country standing indivisible against the Trump agenda. We believe that buying into false promises or accepting partial concessions will only further empower Trump to victimize our fellow citizens. We hope that this guide will provide those who share that belief useful tools to make Congress listen.

P.S. We’re doing this in our free time without coordination or support from our employers. We’re not starting an organization and we’re not selling anything. Feel free to ping some of us on Twitter with questions, edits, recommendations, storiesmabout what is helpful here: @ezralevin, @angelrafpadilla, @texpat, @Leahgreenb. Or email IndivisibleAgainstTrump [at] gmail.com. And please please please spread the word! Only folks who know this exists will use it. Click here to share on Facebook and here to share to Twitter. Thank you! We will win.

Who is this document by and for?

We: Are former progressive congressional staffers who saw the Tea Party beat back President Obama’s agenda.

We: See the enthusiasm to fight the Trump agenda and want to share insider info on how best to influence Congress to do that.

You: Want to do your part to beat back the Trump agenda and understand that will require more than calls & petitions.

You: Should use this guide, share it, amend it, make it your own, and get to work.

Here’s the quick and dirty summary of this document. While this page summarizes top-level takeaways, the full document describes how to actually carry out these activities.

A defensive approach purely focused on stopping Trump from implementing an agenda built on racism, authoritarianism, and corruption.

Ch. 2: How your MoC thinks, and how to use that to save democracy. Reelection, reelection, reelection. MoCs want their constituents to think well of them and they want good, local press. They hate surprises, wasted time, and most of all, bad press that makes them look weak, unlikable, and vulnerable. You will use these interests to make them listen and act.

Ch. 3: Identify or organize your local group. Is there an existing local group or network you can join? Or do you need to start your own? We suggest steps to help mobilize your fellow constituents locally and start organizing for action.

Ch. 4: Four local advocacy tactics that actually work. Most of you have 3 MoCs--two Senators and one Representative. Whether you like it or not, they are your voice in Washington. Your job is to make sure they are, in fact, speaking for you. We’ve identified four key opportunity areas to pressure MoCs that just a handful of local constituents can use to great effect. For each of these always record encounters on video, prepare questions ahead of time, coordinate with your group, and report back to local media:

1) Townhalls: MoCs regularly hold public in-district events to show that they are listening to constituents. Make them listen to you, and report out when they don’t.

2) Non-townhall events. MoCs love cutting ribbons and kissing babies back home. Don’t let them get photo-ops without questions about racism, authoritarianism, and corruption.

3) District office sit-ins/meetings. Every MoC has one or several district offices. Go there. Demand a meeting with the MoC. Report to the world if they refuse to listen.

4) Coordinated calls. Calls are a light lift but can have impact. Organize your local group to barrage your MoCs at an opportune moment and on a specific issue.
https://docs.google.com/document/d/1DzOz3Y...
§Indivisible: A Practical Guide for Resisting the Trump Agenda [PDF]
by former progressive congressional staffers Friday Dec 16th, 2016 11:36 AM 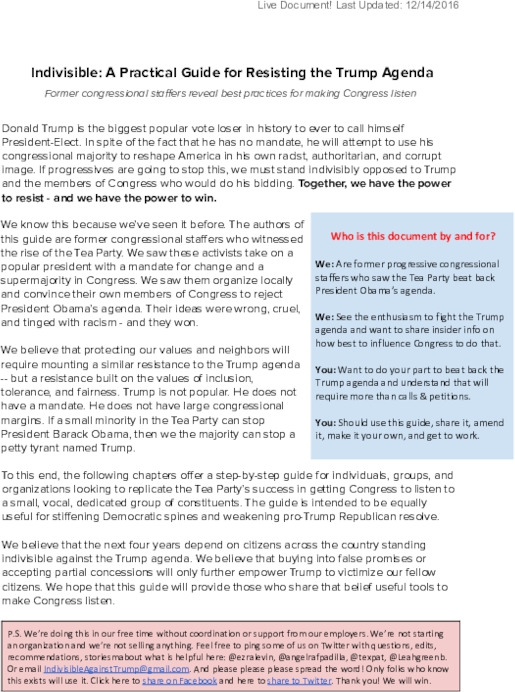 Download PDF (2.1MB)
23 pages
https://docs.google.com/document/d/1DzOz3Y...
§Can't replicate Teabagger "successes" for several reasons
by just sayin Wednesday Dec 21st, 2016 9:32 PM
1. Pre-Teabag: Sarah Palin got a lot of the Republican base foaming at the mouth after 8 depressing years (for them) of reluctantly going along with George W Bush's big government spending and overseas wars. Sarah Palin is dumb as a rock. She's appalling as a person and political figure. [The left cannot rally around a demagogue like Palin, nor over-simplistic slogans that appeal to selfish individualistic interests.]

2. The Teabag — what they called themselves originally until someone tipped them off what that means in sexual terms — movement was kicked off by right-wing astroturf groups like FreedomWorks. But it did eventually catch on, largely due to racist hatred of Obama. [The left has no big money billionaires like the Koche brothers that regularly lead it around by the nose.]

3. Even though there were only a few Teabaggers at the earliest rallies, often with more reporters present than actual demonstrators, the "events" were covered heavily by Fox News and made to look like there was a groundswell of support. [The left does not have a centralized news and reality bubble like FoxNews that has completely controlled the left-wing narrative for decades and can tell it where to go next.]

4. The political rise of the Teabaggers was achievable due to structural dynamics baked into the American cake, largely that white racist dumbasses dominate rural areas, so with increasing gerrymandering they were able to lock in electoral gains in state and federal offices for a decade or more. [The left is stuck with cities and cannot pull off a sweep of this sort, not to mention not having the stomach for ruthless anti-democratic gerrymandering.]

5. Republicans are natural conformists, used to falling in line. [Organizing leftists is like herding cats.]

There are surely even more reasons why the left can't do what the Teabaggers did, even if they wanted to. But, this short list gives a reasonable idea why the sentiment in this post is ill-founded on several levels.

Besides, fuck the Teabaggers. If we are to achieve political success, we'll do it in our own way.
Add Your Comments
LATEST COMMENTS ABOUT THIS ARTICLE
Listed below are the latest comments about this post.
These comments are submitted anonymously by website visitors.