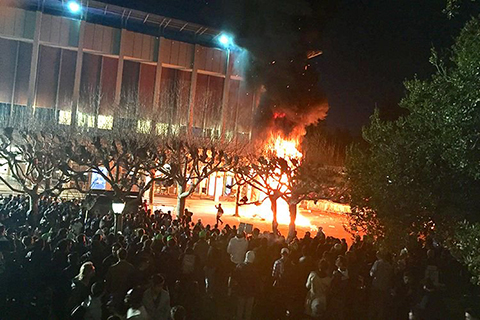 Berkeley Chased Milo Out of Town, Shining National Spotlight on "Alt-Right" Hero
Shortly After Shutdowns of College Speaking Events, Milo Shunned by His Own People

White nationalist Milo Yiannopoulos was scheduled to speak at UC Berkeley on the first day of Black history month in a building named after Martin Luther King, Jr. The event on February 1 was cancelled after a large protest erupted outside the Student Union where he was set to speak. Previously, a speaking event at UC Davis was shut down by anti-fascist protesters. Yiannopoulos and his supporters claimed that the protests and cancellations were counter to the values of Free Speech. The so-called Alt-Right have tried to identify their movement as an extension, or modern incarnation, of the Free Speech movement. Milo's supporters have invoked Mario Savio's name to support their interpretation of the Free Speech Movement.

That right wing support for Yiannopoulos's "free speech" was short lived. Within weeks, a video surfaced in which Yiannopoulos spoke favorably of men having sex with boys and against the concept of consent. Now, Yiannopoulos is facing widespread backlash after he appeared to endorse pedophilia — leading to the cancellation of upcoming speaking gigs, including the annual republican CPAC conference, as well as the publication of his book by publisher Simon & Schuster. Yiannopoulos also resigned his position as an editor at Breitbart News.

Raw Footage from the Shut Down of Milo at UC Berkeley |

Shut Down Milo at UC Berkeley |