Berkeley - On February 1st, Milo Yiannopoulos was run out of Berkeley when protesters objected to his racist campaign to attack sanctuary campuses in Berkeley, and across the nation. The protesters did not object to free speech. The protesters objected to hate speech. The Berkeley College Republicans (BCR) invited Milo Yiannopoulos to spread his hate speech on campus at the Martin Luther King Student Union Building, on February 1st, the start of Black History month in the United States and Canada.

Some of the white supremacists in the nation including Milo Yiannopoulos, Stephen Bannon of the White House, and the illegitimate President Donald J. Trump have united in the attack against immigrants in this country because they feel that there are too many people of color in the U.S.A..

In response to the February 1st protest in Berkeley against the assault on sanctuary campuses, a day later, GOP leader Dan Adamini, Secretary of the Marquette County Republican Party in Michigan promoted the idea that we need another Kent State massacre to bring an end to protests at Cal Berkeley, and other campuses across the nation.

In one Tweet, Dan Adamini wrote: “Violent protesters who shut down free speech? Time for another Kent State perhaps. One bullet stops a lot of thuggery.”

The Kent State massacre occurred during May of 1970, when the brutal National Guard killed four protesters at Kent State University in Ohio. The National Guard also and wounded nine other students when they fired their weapons into a crowd of defenseless student protesters, and students walking to class.

In another Tweet, GOP leader Dan Adamini wrote: “The violent protests at our universities certainly indicate Portage acacia at the lower level. I’m thinking anther Kent State might be the only solution - protest stopped after only one death. They do it because they know there are no consequences yet.”

In addition to being a GOP leader, Dan Adamini is also a Life Insurance Specialist at the Auto Club Group in Marquette Michigan. He also hosts a right-wing radio talk show on WDMJ called in The Right Mind. His right-wing radio show has reportedly presently been suspended for the rest of the month as his contract is being reviewed, as a direct result of threatening the protesters in Berkeley.

The statement of GOP leader Dan Adamini reflects the mindset of many Republicans / white supremacists, all across the nation presently who are not in their right mind, and are sick in the head with their threats of violence, and hatred of fellow Americans and immigrants.

People Are Responding Against The Violent Statements Of Dan Adamini

In response to the call for lethal violence by GOP leader Dan Adamini against the demonstrators and protesters on campus at Cal Berkeley, who protested against the hate speech and attack on sanctuary campuses by Milo Yiannopoulos, the Michigan Democratic Party released the following statement: “On behalf of Party Chair Brandon Dillon, regarding the statements made on social media, by radio personality and current Secretary of the Marquette County Republican Party, Dan Adamini. Dan Adamini, referring to the protests taking place on college campuses throughout the country, called for “another Kent State” and declared that “one bullet stops a lot of thuggery.”

“The statements made on social media by Dan Adamini are sickening, inhuman, and indefensible,” said Brandon Dillon, Chair of the Michigan Democratic Party. “There is no ambiguity or alternative interpretation. To call for “another Kent State” and declare that “one bullet stops a lot of thuggery” is to clearly and openly advocate for the murder of unarmed college students, simply because they don’t share his beliefs or point of view. Mr. Adamini should immediately apologize and then resign from any public or political party positions he holds. His words should be condemned and any association with him disavowed. The right to free speech is the cornerstone of our democracy, and when someone threatens another individual or group with harm for exercising it, that one person is a threat to all of us, as Americans.”

In an article by the Detroit Free Press, Dan Adamini appeared to have failed in his half ass attempt to convince the public that he did not really mean to be expressing violence towards the students / protesters of Berkeley, but was really attempting to stop violence in Berkeley.

From a deleted Tweet from Dan Adamini that was archived on the Way Back Machine, in another half assed attempt to save his so-called credibility he wrote: “Taking a lot of heat for a very poorly worded tweet yesterday. Sorry folks, the intent was to try to stop the violence, not encourage more.” His “SORRY” tweet is totally opposite to his original written claim; “Violent protesters who shut down free speech? Time for another Kent State perhaps. One bullet stops a lot of thuggery.” It appears, that these are not the words of a man trying to stop the violence, but they appear to be the words of a man who is expressing violence towards others, and that he is not in his right mind.

In response to the vile comment of Dan Adamini regarding his statement about Kent State, in a Tweet from Kent State University President Beverly Warren, she wrote: “This is an abhorrent and painful use of our tragedy and has no place in healing the divide in America. We will respond.”

Regarding Dan Adamini and his brutal statement about Kent State, Lori Kossowski, a long time Berkeley resident said, “I think that we should never have another Kent State massacre anywhere in the country. For a man in his position to not only say that, he got his facts wrong. There was more than one person shot, or killed. For people to use this tragedy against free speech at universities, it is not acceptable.”

Additionally, there is a petition going around that people can sign with over 600 signatures so far, in an effort to remove GOP leader Dan Adamini from office.

It was Neil Young, of Crosby, Stills and Nash, who wrote the song Ohio. The song Ohio can be heard on YouTube with images, as a protest song against the massacre that occurred at Kent State during May of 1970.

As for Milo Yiannopoulos, despite being run out of Berkeley by protesters as recent as February 1st, reportedly he plans to come back to Berkeley sometime in the future to spread his hate speech, in addition to resuming his racist campaign to attack sanctuary campuses.

As for the student protesters and the groups united against fascism, they claim they will be ready for Milo Yiannopoulos. If he is dumb enough to come back to Berkeley, they are organized enough to resist his hate speech again, and his assault on sanctuary campuses.

Regarding the Berkeley College Republicans / fascists who claim they are the premier political organization on campus, and are the ones who organized the canceled event in which Milo Yiannopoulos was run out of town by the protesters, reportedly they are presently claiming that they are receiving harassing emails.

Dan Adamini who recently claimed that we need another Kent State massacre in Berkeley to stop the protesters at Cal Berkeley, is officially out of office. See link below... 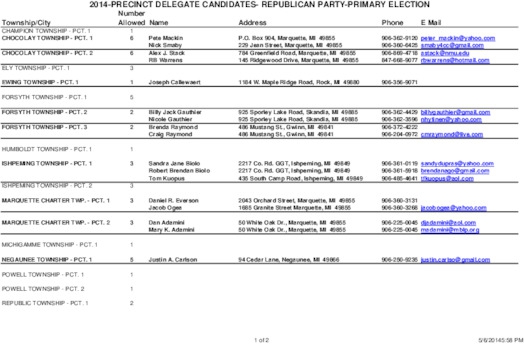 The republicans in Marquette County, removed a link that include much information.

This comment hopefully restores the same information that was removed by the Republicans in Marquette County.

(LC)
§Milo Yiannopoulos book deal cancelled after outrage over child abuse comments
by Posted By Lynda Carson Monday Feb 20th, 2017 5:23 PM
Milo Yiannopoulos put his foot into his mouth again, and appears to be his own worst enemy.

See link to story below... I wonder what disgraced former republican leader Dan Adamini has to say about Milo Yiannopoulos now?

Simon & Schuster pulls forthcoming autobiography, titled Dangerous, for which it had reportedly paid a $250,000 advance