If Ann Coulter Still Goes to Berkeley After Being Canned, Fascist Nathan Damingo Vows to Be There

by One People's Project
After three right wing events that ended up in clashes between neo-Fascists and antifa, UC Berkeley decided to cancel the April 27 speech by Ann Coulter citing security concerns. Despite this, Coulter states that she will still be at Berkeley. 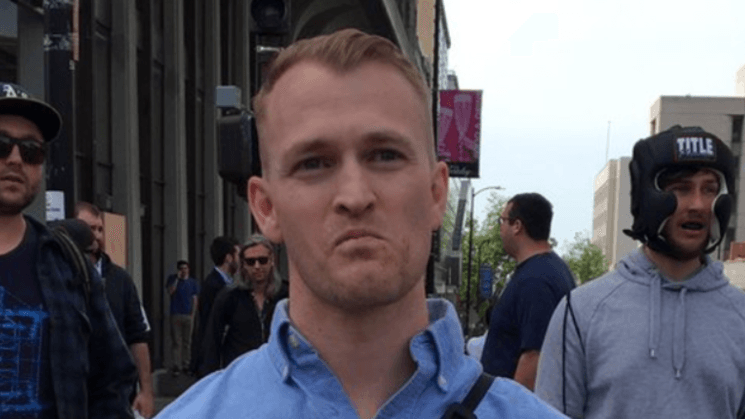 If Ann Coulter Still Goes to Berkeley After Being Canned, Look Who’s Going to Be There!

Nathan Damingo of Identity Evropa has not shown his face since he punched an antifascist activist last Saturday, but he damn sure wants to change that. Oh, please do!

BERKELEY, CA – After three right wing events that ended up in clashes between neo-Fascists and antifa, UC Berkeley decided to cancel the April 27 speech by Ann Coulter citing security concerns. But as Coulter vows that she will still speak at the university, she is getting support and a promise to turn out from one particular fascist – Identity Evropa’s Nathan Damingo, who was seen on video during an April 15 rally punching a woman protesting the event he and other neo-Fascists participated in.

“We have been unable to find a safe and suitable venue for your planned April 27 event featuring Ann Coulter,” an email from university officials to Coulter appearance sponsors Berkeley College Republicans and BridgeUSA read. Despite this, Coulter told the Hollywood Reporter that she will still be at Berkeley citing her freedom of speech. “Yes, it was officially banned,” she said. “But they can’t stop me. I’m an American. I have constitutional rights.”

As Coulter took to Twitter to encourage support and her organizers to secure another venue, Damingo, who was also tweeting about the Auburn University appearance of National Policy Institute head Richard Spencer which was also shut down by that school until a court order allowed it to continue on the basis of contract law, expressed his support for Coulter, saying, “We will be there.”

You have our support @AnnCoulter! We will be there.

Last year, Nathan Damingo, an Iraq War veteran who served five years in prison for robbing a Muslim cab driver in 2007, took over the then-named National Youth Front from Angelo John Gage after he stepped down. After a copyright infringement lawsuit forced them to change its name, they became Identity Evropa, which is best known for plastering posters promoting themselves at college campuses across the country. Last Saturday, Damingo, wearing the light blue long sleeve shirt he often wears, was seen on video involved in the melee that took place in Berkeley during a rally organized by Gavin McInnes’ Proud Boys as well as those who organized a March 4 rally there that also exploded into clashes. In the video, he is seen punching Louise Rosealma and running away, prompting raves from other neo-Fascists, but anger from many more including celebrities like Westworld’s Jeffrey Wright and Chris Evans who plays Captain America in the recent series of Marvel movies.

Punched a woman, and for the cherry on top, the boy ran…like chicken shit.

I hope I run into Nathan.

Nathan Damingo is a re-offender. Send his ass back to prison where he belongs, he’s a danger to society.

@MoistHammer @NathanDamigo Is that what the Marines taught you? Take ya ass to PTSD therapy

Richard Spencer gets punched – he flees.
Nathan Damingo punches a woman – he flees…while she stays in the mix.

Meanwhile, Damingo is calling his assault on Rosealma, who was not seen attacking him “justice”.

Justice is what happened.

There have been calls made to California State Stanislaus, where Damingo is a student, to expel him from the university. Cal State Stanislaus President Ellen Junn said in a statement that the university has indeed launched an “immediate investigation” into allegations that one of its students may have been involved in the demonstration. Meanwhile Chakko Matthai, a spokesman for the city of Berkeley, told KPIX-TV that authorities would be looking into prosecuting the attackers in the protest. At least 20 persons from both sides were arrested in the clash. Damingo however, has not as of yet been arrested for his role.

END_OF_DOCUMENT_TOKEN_TO_BE_REPLACED
Add Your Comments
Latest Comments
Listed below are the latest comments about this post.
These comments are submitted anonymously by website visitors.
TITLE
AUTHOR
DATE
They had me Boxed up (Bat Illegal) and 4 OPD on Motocycles
Zachary RunningWolf
Backup forces!
Become ungovernable!
Protecting a mobile sound system.
Mr. Molotov
bring amplified sound
cp
Coulter says she's still on for April 27
WaPo
Right-Libertarianism: The Inception (Documentary)<---WE HAVE TO RESIST THESE PEOPLE!
Anarchist
Don't let the alt right be the vanguard for the billionaire class!
Prepare for war
Hope (s)he has good security!
It's obvious
Support Independent Media
We are 100% volunteer and depend on your participation to sustain our efforts!