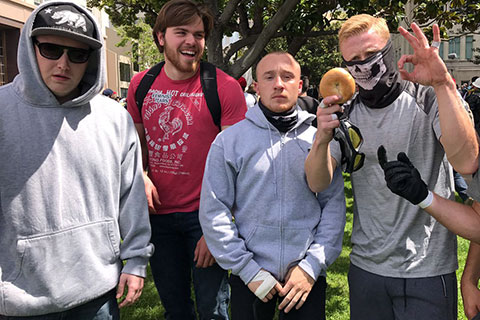 Cops and Klan, Hand in Hand: April 15 in Berkeley
How Berkeley Cops Helped Alt-Right Trolls with No Permit Stage Their Rally

Since April 15, the Alt-Right has been declaring a victory over antifascists in Berkeley, where a mix of Trump supporters, militia members, far-Right bikers, and neo-Nazis gave fascist salutes, held anti-Semitic signs, carried Alt-Right flags, and listened to white nationalist speakers, including one who writes for AltRight.com, the website run by Richard Spencer.

But the leader of the rally, Richard Black, a part of the Alt-Right himself, paints a much different picture. According to a post by Black on the "Free Speech Rally" event page, Black claims that without the coordinated help of the Berkeley Police Department, who worked with Alt-Right organizers, antifascists would have overrun and shut down the rally before it even began.

As Black outlines in his reflection of April 15, Berkeley police worked with the Alt-Right to develop a strategy that both disarmed antifascists and allowed those on the Right to stay armed. Meanwhile, Berkeley police would in turn enforce a permit for the racist rally even though none existed. Furthermore, police also planned to hold back antifascists in order to allow the Alt-Right the ability to evacuate the park once their rally was completed.