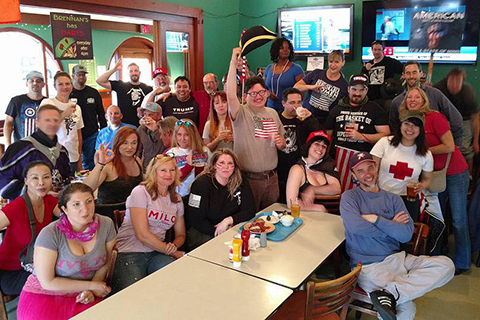 Northern California Anti-Racist Action writes: On May 24, the Berkeley Police Department arrested Eric Clanton in Oakland regarding alleged assaults that occurred during an April 15 confrontation in Berkeley between antifascists and a coalition of far-right groups that included the 3 Percenter and Oath Keeper militias, Identity Evropa, Kyle “Based Stick Man” Chapman, and more. In weeks preceding Clanton’s arrest, members of 4chan’s politics forum called /pol/, the alt-right and all around disgusting and hate-filled internet message board, had been collecting what they considered to be evidence in the case. Threads about Eric Clanton’s alleged behavior could be seen wedged between other discussions such as anti-Semitic conspiracy theories about Jewish world domination and the biological inferiority of people of color.

By all accounts, Clanton’s arrest was in fact triggered by the so-called “research” done by this online convergence of white supremacist trolls. At the same time, 4chan justifies and celebrates it’s own flavor of violence. Well-known fascist leader Nathan Damigo, who already has a history of carrying out racially motivated violence and who announced beforehand that he would be at the Berkeley event, was seen all over the news assaulting Emily Rose Marshall on two separate occasions. For this, Damigo’s documented assaults were turned into heroic memes by the same internet neo-nazis now operating as an auxiliary detective force for the Berkeley Police Department. Nathan Damigo later went on to organize a white power gathering in Charlottesville, VA that looked just like a KKK rally — torches and all — where participants wore khakis instead of white hoods and robes.