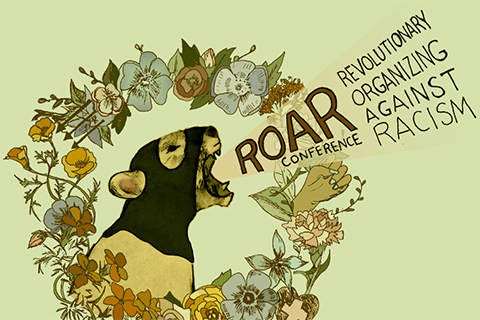 ROAR, aka the Revolutionary Organizing Against Racism Conference, is a free two-day event, organized by Northern California Anti-Racist Action, that will be held on Ohlone Territory March 11 at OMNI Commons in Oakland and March 12th at California Institute for Integral Studies in San Francisco.

Organizers write: During these times more and more attention is being paid to those of us who use direct action and hold liberatory and revolutionary politics. We can use this moment not only to inspire others through our actions, but to also inspire with our ideas.

Themes and topics that will be covered at the conference include but are not limited to: ​Black Liberation/Black Power, Indigenous Struggles, Police Brutality, Community self-defense, Political Prisoners, Intersections of racism and disability, Undocumented + Immigrant struggles, Muslim struggles, Black + Brown unity, Anti-Patriarchy, Transphobia + Homophobia, Anti-Racism for White people, and ​History Lessons from Movements past.