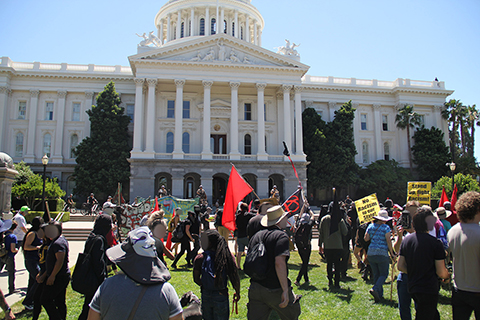 On the morning of June 26, hundreds of anti-fascists gathered on the grounds of the state Capitol, ready to deny access to white supremacists who had announced plans to hold a rally that afternoon. Members of the Traditionalist Workers Party had secured a permit from the California Highway Patrol to rally on the steps of the Capitol building from noon until 2pm, along with the Golden State Skinheads, Blood & Honor, and other anti-immigrant and racist groups. Antifa forces made certain the rally never happened, despite suffering serious casualties while repelling the Nazis.

Anti-Fascist Action Sacramento issued a call-out to "confront these bigots, deny them a platform to promote hate and to make sure they know they are not welcome on our streets or in our communities." A diverse showing from across Northern California and the West Coast came out in solidarity. A militant antifa force of anarchists, punks, anti-racist skinheads, white, Black, Latino, Asian, cisgender, queer, and trans folks set out to deny the Nazis their rally — and they succeeded.

The success of preventing the Nazis from having their moment in the sun came at a steep price, however, when the largest group of perhaps ten or so Nazis arrived at once on the southeast corner of the main Capitol grounds with shields and knives. According to the antifa medical fundraising site, six anti-fascists were stabbed and three others suffered blunt force trauma during a clash with Nazis. At least three of those stabbed were African American.

No “Free Speech” for Fascists: Neo-Nazis Shut Down in Sacramento |

Total Solidarity with the Anti-Fascist Struggle |