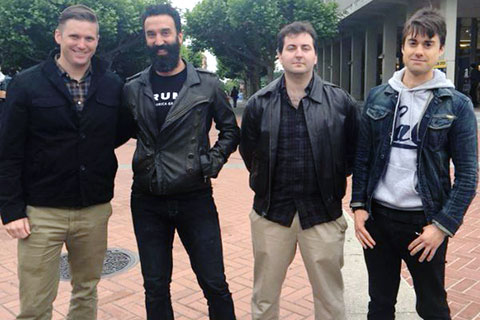 Fascists Organizing and Spreading Propaganda in Berkeley and at UCB
Big Nazi on Campus: How Racists Rallied at UC Berkeley with Police Protection

Identity Europa, formerly known as the National Youth Front, is the youth wing of the Neo-Nazi American Freedom Party. The group, along with members of the National Policy Institute, held a rally on May 6 at the UC Berkeley campus with the full protection and cooperation of campus police. They livestreamed the whole event and put up a large poster in the downtown Berkeley area. Members of the group that participated are well known Neo-Nazis and one, Nathan Damigo, served time for a hate crime against a cab driver. It was the largest open white power gathering in the Bay Area in some time and shows the degree in which the far-fight is growing in the wake of Trump's campaign.

The event itself was billed as a "safe space" to talk about race in America, using language common among left-wing, activist, and anarchist spaces. While they didn't fly completely under the radar, their event happened without being physically shut down. When their gathering was disrupted, twice, briefly, National Policy Institute members waved at the police, who were stationed around the plaza watching the entire event, to come over and back them up. This makes it appear that there had to have been some level of coordination between the white nationalists and UC Berkeley itself, and if a permit was involved, then this would have meant that UC Berkeley students were needed to set those wheels in motion.