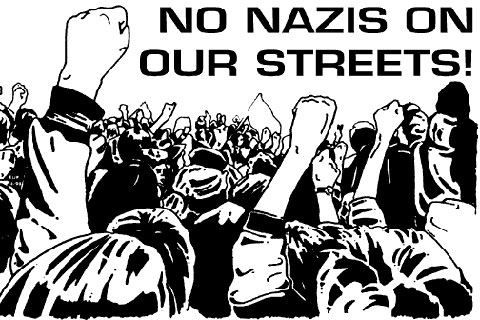 UPDATE: The Nazis were prevented from holding their rally, although there are numerous serious injuries. Nine comrades were hospitalized, six with stab wounds and three with blunt-force trauma to the head. The anti-fascist bail fund has been converted into a medical fund.

On June 26, members of the Traditionalist Workers Party, Golden State Skinheads, Blood & Honor, National Socialist Movement and Ku Klux Klan are holding a rally at the California State Capitol in Sacramento. Although it is shaping up to be the largest white power rally on the west coast in some time, antifascists are determined to shut them down.

Anti-Fascist Action Sacramento "is organizing a direct action to confront these bigots, deny them a platform to promote hate and to make sure they know they are not welcome on out streets or in our communities." Antifa Sacramento continues "We are calling to everyone, young and old, regardless of race, gender, sexual orientation or identity, religion or lack of to unite. Fighting fascism is a moral duty, not a political one! Ignoring them only perpetuates white supremacy!"

Bay Area Carpool to Sacramento to Shut Down Nazis and KKK |

Info Night on May 28: Neo-Nazis in Berkeley and Organizing Against Them |

Bay Area Carpool to Sacramento to Shut Down Nazis and KKK

Related Feature: Fascists Organizing and Spreading Propaganda in Berkeley and at UCB