Info Night: Neo-Nazis in Berkeley and Organizing Against Them 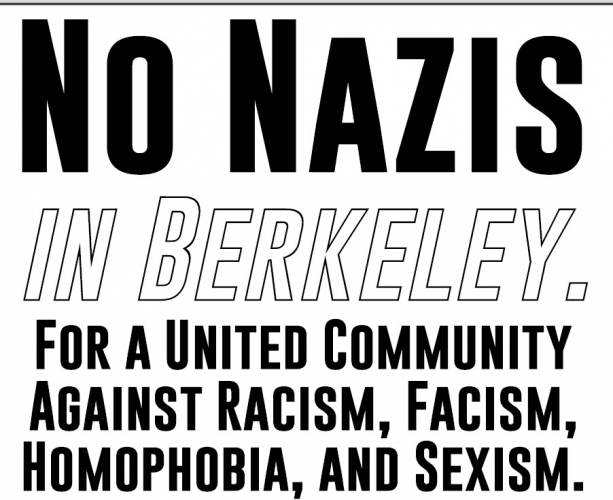 Soon after, posters began to appear promoting Identity Evropa, showing that there are neo-nazis in Berkeley that they are trying to organize. Posters and flyers have been found on major Berkeley streets such as Euclid, University, Allston, Shattuck and also in residental neighborhoods. While all of these posters have been quickly ripped down, Identity Evropa and other white power activists appear keen on continuing to organize in the Bay Area.

Join us on Saturday, May 28th at 7pm at the Long Haul Infoshop in Berkeley, located on Shattuck and Woosley Ave (across from La Pena and The Starry Plough) to discuss how we as people who live and work in Berkeley can organize against white supremacy and fascism. We will talk about what is known about these groups and brainstorm about what we can continue to do to resist them.

Flyers and stickers will also be on hand for free so individuals and groups can let the Nazis know that the bay area is off limits to racists and fascists!

More background info:
https://itsgoingdown.org/big-nazis-on-campus/
https://www.indybay.org/newsitems/2016/05/18/18786533.php
https://www.indybay.org/newsitems/2016/05/22/18786710.php
END_OF_DOCUMENT_TOKEN_TO_BE_REPLACED
Added to the calendar on Wed, May 25, 2016 5:27PM
Add Your Comments
Latest Comments
Listed below are the latest comments about this post.
These comments are submitted anonymously by website visitors.
TITLE
AUTHOR
DATE
First Indigenous Mayor in US History will be there
Zachary RunningWolf
Support Independent Media
We are 100% volunteer and depend on your participation to sustain our efforts!