Add an Event
Newswire
Calendar
Features
Home
Donate
From the Open-Publishing Calendar
From the Open-Publishing Newswire
Indybay Feature
Publish to Newswire
Add an Event
Related Categories: East Bay | Racial Justice
Berkeley: Neo-Nazi posters taken down, replaced in under 24hours w/ Anti-Fascist message
by 80000
Sunday May 22nd, 2016 8:56 PM
Sunday, May 22, 2016: The white nationalist group Identity Evropa posted a series of photos on Twitter, indicating that they had pasted 9 new posters with their name and message around Berkeley. At 4:16am, they tweeted: "We noticed that some triggered individual ripped down our poster. However, we are still here." Less than 24 hours later, areas in West Berkeley could be seen to have replaced IE's posters with stickers reading "Anti-Fascist Zone."
On Sunday, May 22, white nationalist group Identity Evropa (IE) tweeted a series of photos to their Twitter account. At 3:38am, IE tweeted: "We went back to Berkeley to show the antidialogical actors that there is nothing they can do to halt us. #WeAreHere," followed by four photos of their posters in public areas. The photos appear to have been taken during daylight hours.

We went back to Berkeley to show the antidialogical actors that there is nothing they can do to halt us. #WeAreHere pic.twitter.com/MHO1cg6f0m

At 3:40am, IE responded to their post with four more similar photos, including the hashtag "#BerkeleyBound."

Their string of Berkeley-oriented tweets sent out Sunday morning included a response to a previous photo published by IE on May 19th at 8:10am. The tweet reads: "Do you even understand who you are or what you are capable of? Become part of a revolution that will shake the world."

Do you even understand who you are or what you are capable of? Become part of a revolution that will shake the world pic.twitter.com/ixFxzjyoLb

IE responded to their May 19th post at 4:16am on May 22, minutes after releasing 8 new propaganda photos. Indicating that the poster from the earlier tweet had been torn down, they write: "We noticed that some triggered individual ripped down our poster. However, we are still here." A photo of a new poster in place of the one pictured on May 19th was included:

@IdentityEvropa We noticed that some triggered individual ripped down our poster. However, we are still here. pic.twitter.com/AwWC3xeKBf

Yet less than 24 hours after these series of tweets, the areas in North and West Berkeley targeted by IE propaganda appear to be missing many of the group's posters, replaced instead with stickers reading: "ANTI-FASCIST ZONE not safe for racists, neo-nazis, and white nationalists."

The twitter page Identity Evropa has taken responsibility for a number of posters put up in Berkeley, often in areas with significant foot traffic. Photos have been tweeted consistently following their white supremacist rally at UC Berkeley on May 6, 2016, where they received protection from the police.

More posters were discovered throughout the week of the 15th, as documented on IndyBay.

On May 14 at 9:14pm, Identity Evropa posted the following propaganda poster on twitter. A similar poster was uploaded to Indybay on May 19th, at 3:00pm, with the author claiming to have found it displayed publicly in West Berkeley.

The weak shall inherit nothing. pic.twitter.com/haVWiTVOYh

(Color photograph of a poster against a beige background, likely a utility box. The black background suggests the photograph was taken at night. The flash against the image further alludes to the time, and indicates that the poster paper is glossy. The poster shows a black and white close up photograph of a Roman, male statue wearing a laurel wreath. White letters in all caps read: "SERVE YOUR PEOPLE." Below, "Identity Evropa" is written in smaller, aqua font. The twitter posting of this image is captioned: "The weak shall inherit nothing.") 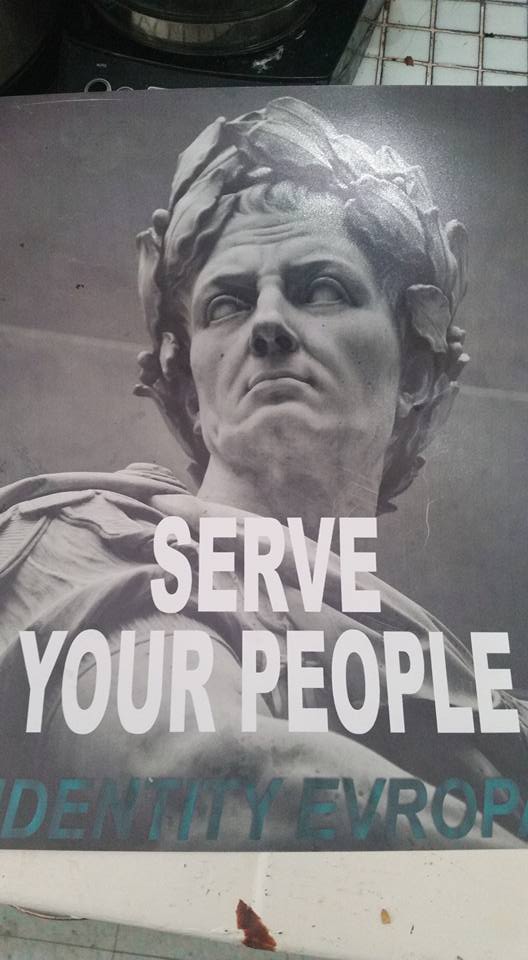 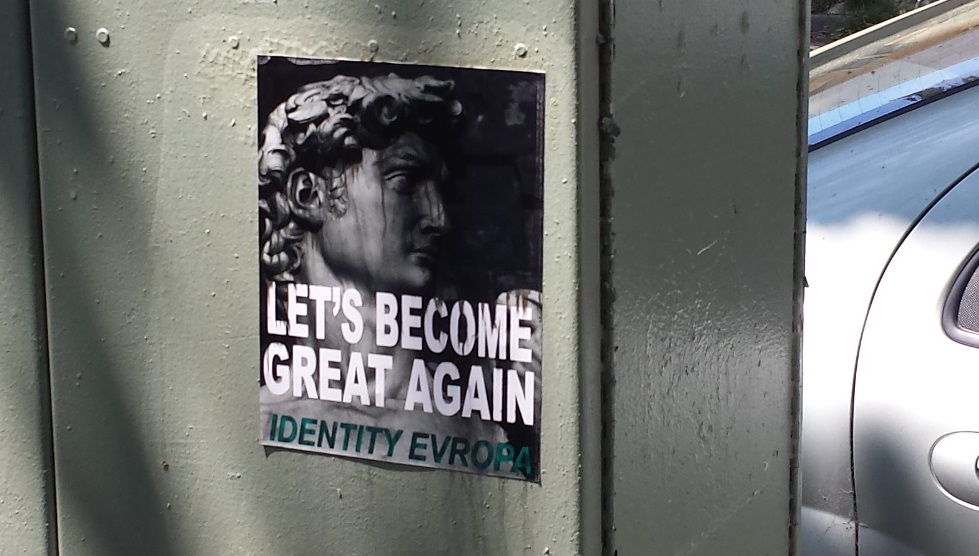 The posters on the IE Twitter and Indybay display a particular set of slogans, including: "PROTECT YOUR HERITAGE," "OUR DESTINY IS OURS," "BECOME WHO WE ARE," "OUR FUTURE BELONGS TO US," and "LET'S BECOME GREAT AGAIN."
Add Your Comments
LATEST COMMENTS ABOUT THIS ARTICLE
Listed below are the latest comments about this post.
These comments are submitted anonymously by website visitors.