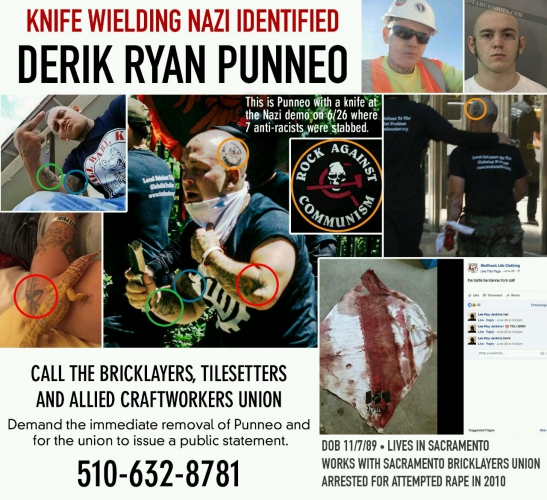 Submitted to It's Going Down

Derik Ryan Punneo is the man seen wielding a knife with bloody hands apparently after stabbing anti-racist protesters in the widely circulated images from the Nazi rally in Sacramento on 6/26. After a planned rally at the California state capital by the Traditionalist Workers Party and the Golden State Skinheads was prevented from taking place by a large number of anti-fascist and anti-racist protesters, a group of Nazis donning t-shirts featuring the TWP logo attacked and stabbed a number of protesters. While the strong showing from protesters decisively defeated the Nazis and their political aspirations in the streets, 7 anti-racist protesters suffered wounds requiring hospitalization from these stabbings.

Punneo currently resides in Sacramento and works with the Bricklayers, Tilesetters and Allied Craftworkers Union, BAC Local 3. He has a widely documented history of arrests for violent behavior including an arrest for an attempted rape in 2010 and several more arrests in 2012. Such activity seems far removed from the calls for “Faith, Family, and Folk” of the Neo-Nazi Traditionalist Worker Party he is a member of, but is common within the violent Neo-Nazi skinhead subculture of the Golden State Skinheads that he comes out of.

Two of Punneo’s associates were arrested and charged after they kidnapped and violently retaliated against two individuals that had called the police due to Punneo’s attempted rape of a woman. According to court documents:

The prosecutor’s recitation of the factual basis for the plea stated codefendant Derik Punneo was arrested for attempted rape and resisting arrest after he assaulted a woman and was forced out of the house by two others, who called the police. While Punneo was in custody, he contacted defendant and codefendant Taylor Schwartz, told them what had happened, and accused the victims of stealing his money. Defendant and Schwartz found the two who had called the police; forced them into a car; drove them home; ransacked their house; beat up the man; and threatened that, if the victims went to court, bad things would happen and their house would be burned down.

The document then went on to state:

The prosecutor stated there was information that Punneo, Schwartz, and defendant were members of a skinhead gang and that Schwartz and defendant aided Punneo because they were all skinheads. Both Punneo and Schwartz had tattoos and indicia of being members of the skinhead gang; and a gang expert would testify that Punneo, Schwartz, and defendant all acted for the benefit of a criminal street gang and participated in a gang known as the skinheads…Thereafter, defendant pled guilty to being an active member of a criminal street gang…

We demand the immediate removal of the Punneo by the BAC union and for the union to issue a public statement denouncing Punneo, his fascist and Neo-Nazi ideas, and his history of criminal and violent behavior towards the Sacramento community. The main union office of Local 3 that Punneo is a member of can be reached at (916) 376-9101.

Currently due to high calls, BAC Local 3 has established a pre-recording stating that Punneo, “Is not an employee…” of the union and that BAC Local 3 does “not support prejudice.” On their Facebook page, they posted that they support a “diverse membership…” All of these statements mean nothing and do not address the unions position on a violent Neo-Nazi within their ranks. We urge everyone to call and demand that they expel Punneo and denounce him.

Above is an informational flyer that shows Punneo wielding a knife on Sunday, June 26th and links photos of his tattoos from the picture to those on social media. As you can see in the pictures above, Punneo’s tattoos are quite visible in both the snapshots of him with the knife and in his Facebook photos, including his tear drop tattoo and “WHITE PRIDE” white bracelet.

https://itsgoingdown.org/sacramento-nazi-d...
§Punneo currently works with BAC Local 3 in the Sacramento area.
by It's Going Down Thursday Jun 30th, 2016 10:50 PM 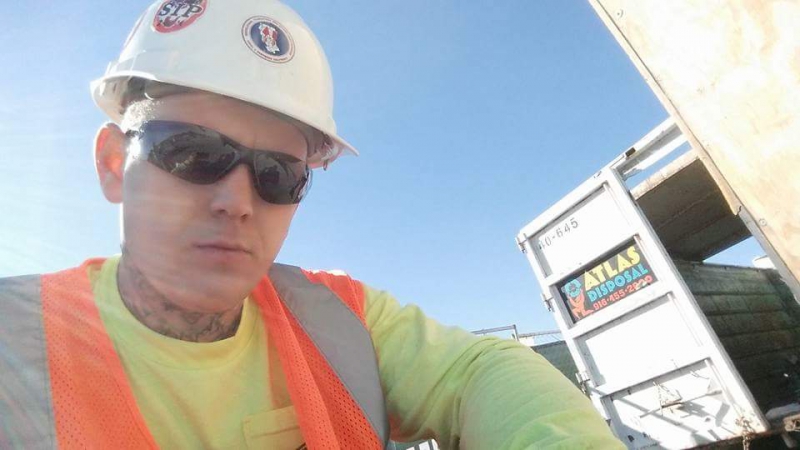 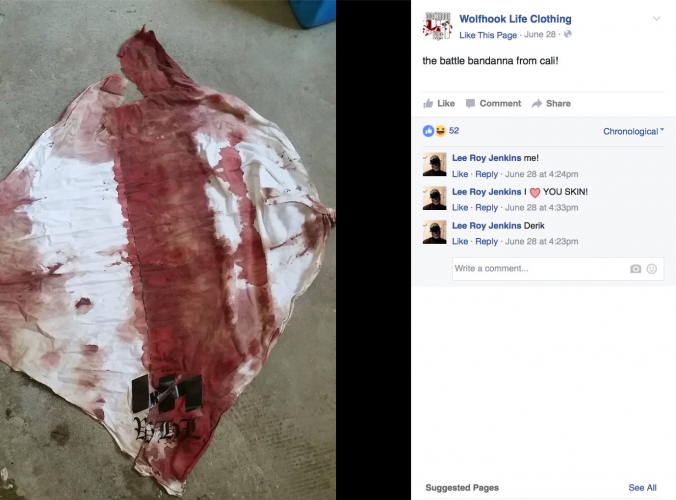 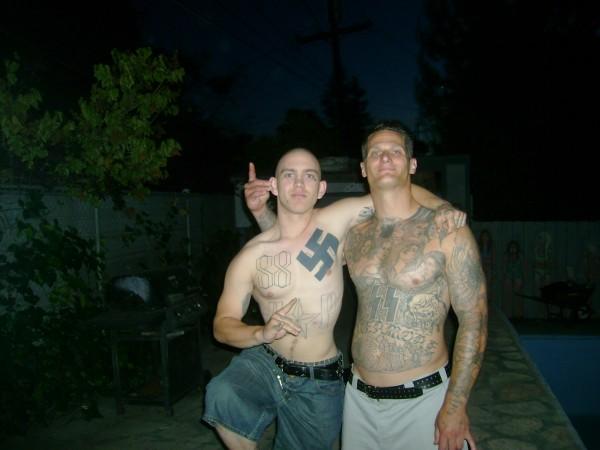 https://itsgoingdown.org/sacramento-nazi-d...
Add Your Comments
Support Independent Media
We are 100% volunteer and depend on your participation to sustain our efforts!