Add an Event
Newswire
Calendar
Features
Home
Donate
From the Open-Publishing Calendar
From the Open-Publishing Newswire
Indybay Feature
Publish to Newswire
Add an Event
Related Categories: California | Central Valley | U.S. | Global Justice & Anti-Capitalism | Immigrant Rights | Police State & Prisons | Racial Justice
Sacramento protest: Victory over fascism
by PSL Sacramento
Tuesday Jun 28th, 2016 8:37 PM
People from the Sacramento community and anti-racist protesters from around northern California started to assemble in the morning to prevent the white supremacists from entering the capitol grounds and holding their hate rally. Militarized police cornered the protesters on the street to allow space for fascists to assemble, but to their surprise the protesters heroically challenged them and took over the steps of the capitol building before the fascists could assemble. 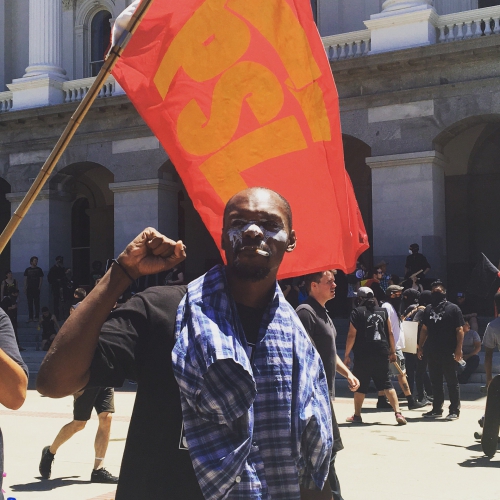 original image (1920x1920)
On June 26, fascists were chased off of their intended rally site by hundreds of anti-fascist protesters at the California State Capitol building.

People from the Sacramento community and anti-racist protesters from around northern California started to assemble in the morning to prevent the white supremacists from entering the capitol grounds and holding their hate rally. Militarized police cornered the protesters on the street to allow space for fascists to assemble, but to their surprise the protesters heroically challenged them and took over the steps of the capitol building before the fascists could assemble.

Around noon several different groups of white supremacists, totaling about 20, charged protesters and attacked them while trying to get to the capitol building. A melee resulted in seven anti-fascist protesters being hospitalized, many for stab wounds or concussions inflicted by the fascists. A fascist was also reportedly hospitalized for injuries. In the end, the steps of the capitol were continuously occupied by anti-racist activists and the skinhead racists were never able to hold their rally—a huge victory!

The white supremacist fascists had taken out a permit under the banner of the Traditionalist Workers Party—a newly-formed group that aims to indoctrinate youth into white nationalism. The TWP tries to cover up its fascist intentions with less aggressive language on their website, but underneath their claims of concern for white workers lies their murderous hatred of immigrants and people of color.

Riding on the coattails of this year’s dramatically polarizing election, the group hopes to recruit new, young members and run racist political candidates for local office in various states. The chairman of the TWP, Matthew Heimbach, chose to stay home and avoided the event. The event was also supported by several other white supremacist groups including the Golden State Skinheads. Racist skinheads have a violent history in Sacramento including racist and homophobic murders.

The some 500 anti-racist protesters who covered the capitol grounds were people of many political orientations, races, genders, and ages united against the hate group and its preaching of deadly racist ideas. The counter demonstration was supported by many groups, including Antifa Sacramento, Anti Police Terror Project, Sacramento Brown Berets, the Progressive Labor Party, various anarchist collectives and the Party for Socialism and Liberation. A PSL member was attacked, beaten and pepper sprayed by fascists, but he was saved by protesters and is in fine condition.

During a clash, as at least four anti-fascist protesters were stabbed, the police offered no immediate aid and ended up threatening and trying to intimidate those who were documenting what was going on. The militarized Sacramento police and CHP brought out many of their favorite weapons to threaten protesters with—automatic rifles and bean bag rounds. They brandished batons atop horses and marched along police trucks and armored vehicles. Two Nazis who were allegedly beaten after giving a Nazi salute and attacking protesters were quickly swept into safety inside the capitol building by a group of police.

Despite the close proximity to large groups of law enforcement, no arrests were made regarding the stabbings—mirroring the injustices of the recent stabbings by KKK members in Anaheim in which no Klansmen were charged despite assaulting multiple protesters with deadly weapons. This precedent of impunity set in Anaheim emboldened these Northern California white supremacist groups to get a rally permit and bring knives and shields.

The police must share the blame for each of the people who were viciously stabbed in Sacramento. This turning a blind eye while fascists stab and slash a handful of youth is evidence of the complicity of this system and its police.

White supremacists should not be entitled to “free speech” to preach their hateful messages and incite beatings and murders. They should be arrested at once as a terrorist organization, not protected by the state. The people must continue to confront fascism and racism wherever it tries to grow! We must not be fooled when they try to put on a less aggressive face, like the Traditionalist Workers Party!

When the people unite we have the power to defeat those who would call for our abuse and murder, those who try to dehumanize the majority of people in this country, those who intend to revive the darkest horrors of racism, anti-semitism, and anti-LGBTQ bigotry! The people have the power to shut down the nazis and in Sacramento the people had victory!
https://www.liberationnews.org/sacramento-...
Add Your Comments
Support Independent Media
We are 100% volunteer and depend on your participation to sustain our efforts!