Add an Event
Newswire
Calendar
Features
Home
Donate
From the Open-Publishing Calendar
From the Open-Publishing Newswire
Indybay Feature
Publish to Newswire
Add an Event
Related Categories: Central Valley | Global Justice & Anti-Capitalism | Media Activism & Independent Media | Racial Justice
Anti-Fascist No Platform Victory: ABC10 Pulls Sacramento Nazi Interview After Complaints
by Dave Id
Friday Jul 1st, 2016 4:07 PM
Direct action may get the goods, but sometimes a few people speaking up can result in minor victories, too. That's what happened after Sacramento's ABC10/KXTV television station thought it would be a good idea to provide a platform for Matthew Heimbach of the Traditionalist Workers Party to spout his lies, just two days after Sacramento Nazis acting on his behalf sent nine anti-racists to the hospital, six with stab wounds and three with blunt force trauma. While the interview already had been online close to a day, and was likely broadcast, the video was pulled from ABC's website within two hours of complaints pouring in via social media. 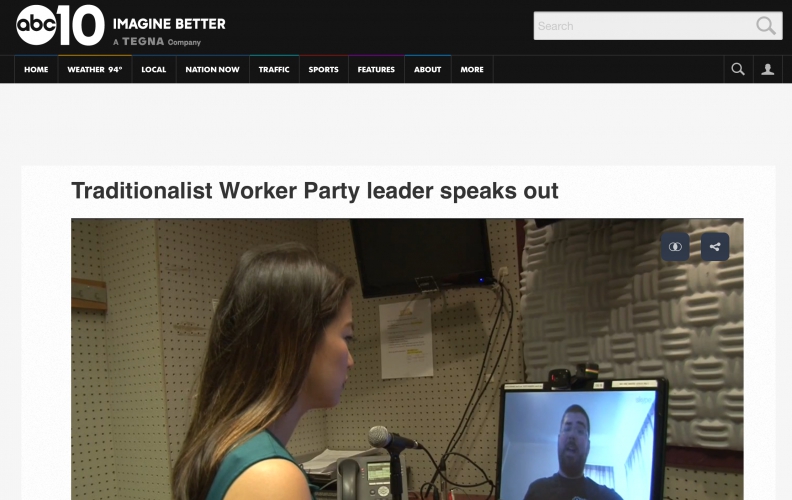 original image (2226x1404)
[Framing the interview with a nazi as giving a victim a voice: "Traditionalist Worker Party leader speaks out"]


The storm of complaints were kicked off by a straightforward tweet directed at the TV station and reporter Frances Wang: "Why in the fuck are @ABC10Frances and @ABC10 amplifying the lies of Nazi stabbers?" It quickly picked up from there. One response read: "Just watched @ABC10Frances interview. Galling. She literally served as mouthpiece for a Nazi leader whose members stab people @ABC10"

ABC10 should have known better, and in fact they did, so it's puzzling why they chose to give a such a prominent platform to Heimbach. Perhaps it was ratings the station was after. Perhaps they got carried away in the moment after reporter Frances Wang's live tweeting from the scene at the Capitol on June 26 received thousands of retweets and the story became international news. Whatever the reason, it was highly irresponsible, to say the least.

Wang was clearly in over her head throughout, apparently never having covered intense demonstrations, and obviously unfamiliar with the issues at hand. She kept putting the word "nazis" in quotes in her tweets, as if the Traditionalist Workers Party, Golden State Skinheads, and other assorted racists who planned to rally on the Capitol steps aren't actual nazis.

Giving undue credence to a reporter from a major television station, other corporate media outlets repeated Wang's use of scare quotes.

Outside of her comfort zone, it was as if Wang was reporting from some alien planet where words have no meaning. Perhaps most bizarrely of all, she put "counter protestors [sic]" in quotes. What else would you call the hundreds of antifa who had assembled to deny the nazis their permitted rally at the Capitol building?

ABC10 is not necessarily responsible for what one reporter tweets on her own, but the station can be called to account for what they broadcast and what they publish online. Several hours after the action at the Capitol, ABC10 staff continued with the scare quotes in a report that read: "Traditionalist Worker Party... was met by counter protestors calling the party 'Nazis' and 'fascists.'"

Any quick check of the Traditionalist Workers Party website and social media accounts reveals that the passive messaging the group feeds to gullible media outlets is complete bullshit. It's full of racial hatred, anti-immigrant bile, anti-Semitic references to the shapes of people's noses, and the placing of Jewish names within triple parentheses (aka nazi echoes). Open calls for the return of nazi gas chambers and other genocidal rhetoric is never more than a click or two away.

ABC10 finally figured out by June 27 that the Traditionalist Workers Party are in fact nazis, noting in a story that "the group is a front for neo-Nazi sympathizers." Shamefully, the following day, they proceeded to promote an interview with Heimbach, giving him a platform to claim that his group are not nazis nor are they white supremacist.

In the rather fumbling interview with Heimbach, Frances Wang beat around the bush, trying to get at the "accusation" (yes, scare quotes) that Heimbach and his group of nazi stabbers are actually nazis. Heimbach knew where she was going with her question and replied that the counter-protesting anti-fascists use the word "nazi" as an unfair epithet. They never call themselves that, he said.

Continuing with a line of questioning based on their own bullshit propaganda, Wang prompted Heimbach to reiterate the lie that the Traditionalist Workers Party is not white supremacist, rather they are merely interested in looking out for the interests of white working people from a non-racist perspective.

Wang did not challenge Heimbach on his racism or that the Traditionalist Workers Party do not consider themselves nazis. Heimbach knew he had found a corporate media patsy and took full advantage of the high visibility platform he was granted to further claim that the stabbings of six people, including at least three African Americans and a 58-year old woman, were in self-defense.

Heimbach was allowed to portray himself and the Traditionalist Workers Party as misunderstood victims for close to five minutes, at least in the online version. Frances Wang let herself be played for a fool, and ABC10 thought it was a solid piece of journalism worth sharing with the world.

Heimbach and his nazi allies knew the interview was a big win for them. They gleefully shared the link to the video all over. It was through their links that ABC's gross negligence was discovered, leading to the initial social media complaint cited here.

Would ABC10 give its precious airtime to a person of color who had just organized a premeditated mass stabbing of whites? It's doubtful.

After a clear photograph was published on Indybay of Traditionalist Workers Party nazis during their stabbing attack on anti-fascists, Sacramento nazi Derik Punneo was identified by the website "It's Going Down" as the most prominent nazi holding a shank in the photo.

Anyone who then looked at Punneo's MySpace profile (since deleted) would have discovered his own photos that, low and behold, show him proudly sporting enormous nazi tattoos, including a thick swastika that covers half of his chest.

The Wang/ABC10 interview was likely broadcast throughout the Central Valley on June 28, the day it went up on their website. It remained online until after it was first called out in social media at 2:32pm on June 29. By 4:15pm, however, the video was gone, without comment from ABC10. Rack it up as yet another example of the dangers of corporate media to humanity — and a No Platform victory.

Why No Platform Is Still Relevant
http://libcom.org/blog/why-no-platform-still-relevant-trouble-liberal-anti-fascism-05012013 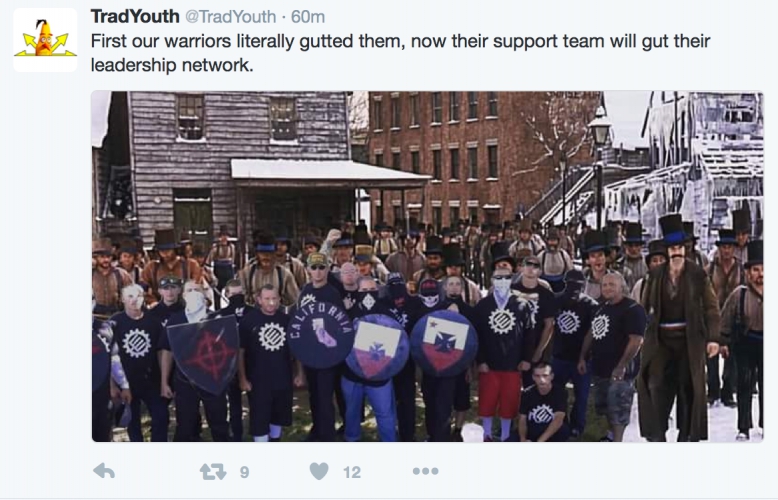 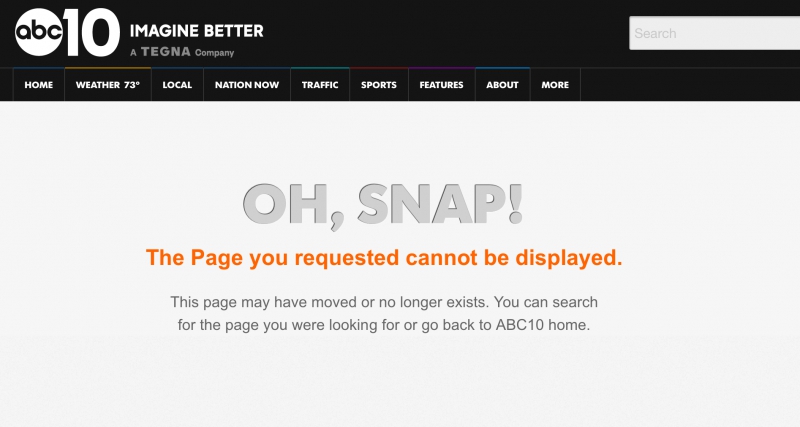 original image (1894x1012)
The original text on ABC's webpage described the Traditionalist Worker Party as "controversial" and their premeditated stabbings of six anti-racists as "chaos." ABC promoted the interview as being the first time Matthew Heimbach had spoken out about what happened at the Capitol on June 26. Actually, he had already spoken out plenty, while his followers were stabbing people and after, reveling in their racist violence. This was the "first time," however, that he was granted such a wide audience by a prominent television station.

The leader of the Traditionalist Worker Party, the controversial group at the center of all the Capitol chaos, is talking for the first time since the Sunday violence.

http://www.indybay.org/newsitems/2016/06/2...
Add Your Comments
LATEST COMMENTS ABOUT THIS ARTICLE
Listed below are the latest comments about this post.
These comments are submitted anonymously by website visitors.