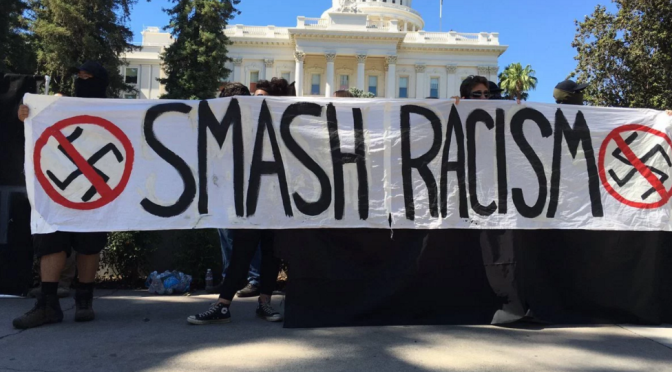 After Sunday’s mass action and the number of anti-fascist protesters who needed medical care, the call to support those who were on the ground has echoed through anti-fascist organizations internationally. Antifa Sacramento, one of the organizations who organized the event to confront the Traditionalist Youth Network and the neo-Nazi skinheads in Sacramento, has a fundraiser intended to go support those who have medical expenses. The treatment they are receiving can end up incredibly costly, and this is a way to give a strong show of support to those who were attacked in Sacramento.

The statement from Antifa Sacramento reads:

Today in Sacramento, Anti-Fascist Action in conjunction with hundreds of fellow Anti-Fascists from near and far successfully shut down the Traditionalist Worker’s Party (TWP) attempt to hold a white supremacist rally on the capitol. Protestors took and held the west steps, preventing the fascists from being able to reach their rally destination.
TWP chairman Matthew Heimbach skipped out on the rally despite making previous plans to attend, opting instead to send his footmen out to do his dirty-work. Two lone bigots briefly made their way to an adjacent side, where one of them sieg heiled on the Capitol steps. Despite the circumstances, the fascist thugs celebrate their poorly coordinated and executed “mobilization” of around 20 people as a victory, solely on the grounds that they injured more people than their opposition did.
Our victory did not come without consequence, and several have been hurt. So far we know of 8 comrades who have been injured to a degree that required hospitalization. Our next step is to provide support for those who sustained injuries during the shutdown, as well as legal support as needed. If you want to help the brave souls who put their well-being on the line today to keep neo-Nazis and white supremacists out of our streets, we ask that you make a donation to our support fund

One of the biggest components of anti-fascist organizing is supporting folks after events, especially if they have any legal or medical issues. Click the link below to donate to their fund, and you can also organize fundraisers in your local area. An example of this is the fundraiser event that Rose City Antifa is doing in Portland, Oregon, where several anti-fascist bands are playing a benefit show. If your organization is going to do a unique fundraising event, let us know about it, and we can help to promote it!

Click here to donate to the Antifa Sacramento fundraising effort.

https://antifascistnews.net/2016/06/29/don...
Add Your Comments
Support Independent Media
We are 100% volunteer and depend on your participation to sustain our efforts!