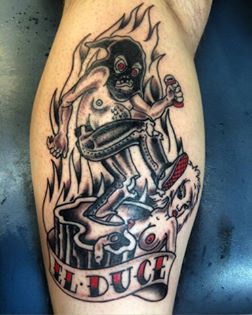 This lovely "El Duce" tattoo of a naked woman being kicked in the head is proudly displayed on The Mentors' facebook account.
§Canceled performance in Pacifica
by Clara Summers Saturday Sep 2nd, 2017 11:10 AM
According to the bartender, they canceled their show in Pacifica on September 3.
§The Mentors are Not Playing at Oakland's Stork Club
by ZeFitzy reports Tuesday Sep 5th, 2017 12:05 PM
4 Sep 2017
ZeFitzy tweeted:

Spoke with someone at the Stork—they said the Mentors are *not* playing 9/5/17. They were removed from the calendar.

Person I spoke with on the phone said they'd never really been booked—it was posted without authorization. Would be interested to know more.

https://twitter.com/Indybay/status/9048507...
Add Your Comments
LATEST COMMENTS ABOUT THIS ARTICLE
Listed below are the latest comments about this post.
These comments are submitted anonymously by website visitors.