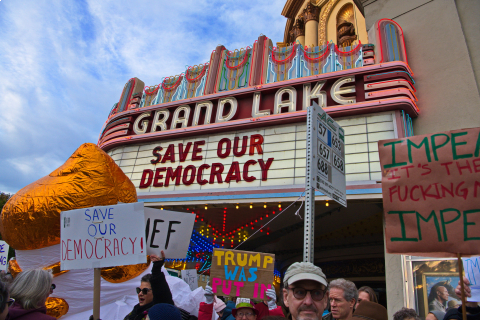 On the evening of December 17, the day that the house was to vote on Articles of Impeachment against Donald Trump, the Nation erupted into hundreds of demonstrations urging a vote to impeach. The San Francisco Bay area was no exception. Organized by Indivisible, MoveOn and others, there were demonstrations locally in over forty cities and towns. With homemade posters and chants, demonstrators demanded not only impeachment, but removal and imprisonment for the many crimes of the Trump regime.

The following day, December 18, the House voted to impeach Trump on two counts related to his scheme to get Ukraine to announce investigations into his political rivals: Abuse of Power and Obstruction of Congress.

Oakland: Over 500 demonstrators rallied on Oakland’s Grand Avenue in front of the Grand Lake Theater to express their outrage over the Trump regime. On all corners of the large intersection, crowds shouted and held both angry and humorous signs.

Palo Alto: Hundreds gathered in Lytton Plaza downtown. A giant balloon of Donald Trump as a chicken was on display, as it has been in Palo Alto on at least two other occasions.

In SF, Music Punctuates Enthusiastic Chanting at Rally and March on Eve of Historic Impeachment Vote |

In Mountain View, Seasonal and Humorous Signs at Eve of Impeachment Demo on Four Corners |

Clovis: Around 350 demonstrators turned out for a pro-impeachment rally in Clovis, adjacent to Fresno.

See Also: Impeachment Day: The Yacht Sequoia and the Trump v. Nixon fiasco | Exposed by Ambassador Sondland, Trump will say anything to remain in the oval office |

The Whims of Those who Rule: Our Age of Lawlessness