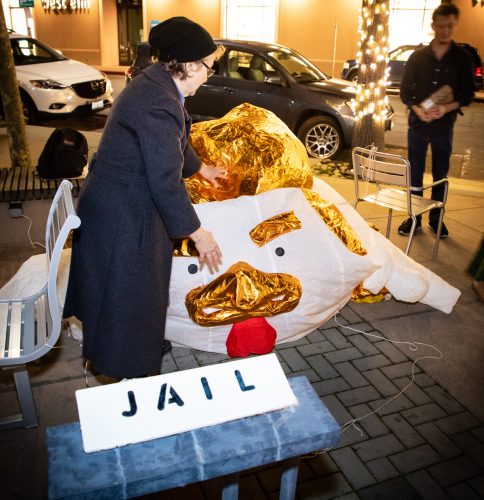 An impeachment rally in Palo Alto got underway at 5:30 p.m. at Lytton Plaza where protests have historically been held. "This protest is one for the books," said one of the demonstrators as she hoisted up a grandchild in front of an 8 ft. high "Chicken Trump" balloon effigy.

The giant balloon of Donald Trump as a chicken has been to Palo Alto on at least two other occasions. On Tax Day, shortly after Trump took office, it showed up in the very same plaza at a demonstration where protesters demanded that Trump release his tax information. In early autumn 2019, Trump held a fundraiser at a location his staff worked hard to keep secret, including from the press. That location, it was discovered ahead of time by activists after much sleuthing, was to be held at a mansion in the hills of Palo Alto. The Trump chicken arrived in the nick of time to stand next to the Raging Grannies on the road leading up to the doors of the gala event.

It seems there is a natural affinity between Chicken Trump and the Grannies, as the the elderly activist women posed for photos in front of the giant balloon at yesterday's impeachment rally. Protesters with small children told them "you can tell your grandchildren you were part of the action to impeach Trump, that you were a part of history" as they propped their little ones in front of Chicken Trump for photos. Later, activists discovered the the group Vigil for Democracy had enabled Chicken Trump's appearance at all three events.

As is the norm at Palo Alto rallies, demonstrators sang familiar songs with repetitive lyrics so that people could join in the liveliness....accompanied by a guitarist and, in keeping with the season, a Raging Granny on jingle bells.
§Street theater with Chicken Trump
by Text: RR Photos: Wesley Chang, Pro Bono Photo Wednesday Dec 18th, 2019 2:30 AM 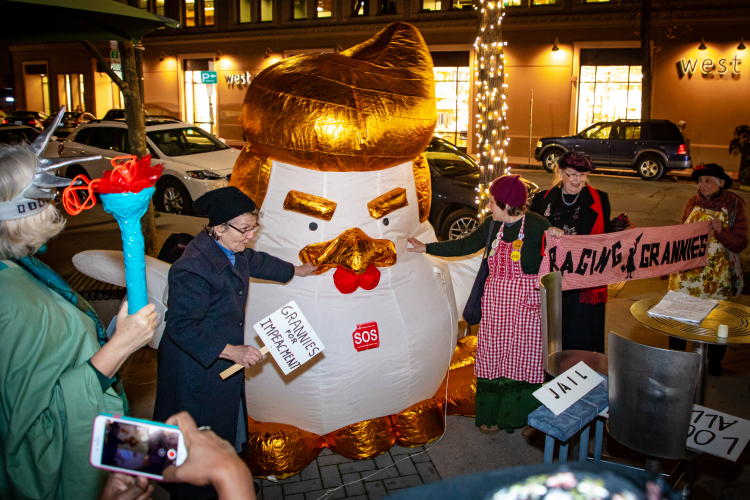 original image (5603x3735)
The Statue of Liberty gave the bastard a dressing down
§Crowd blocking the street in front of the plaza
by Text: RR Photos: Wesley Chang, Pro Bono Photo Wednesday Dec 18th, 2019 2:30 AM 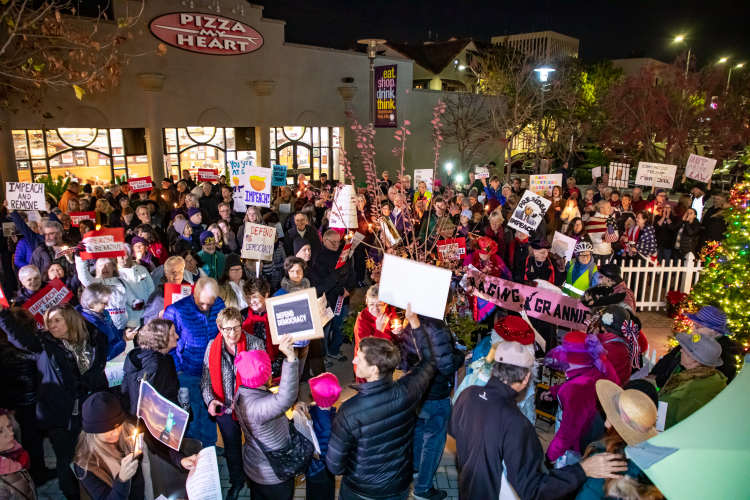 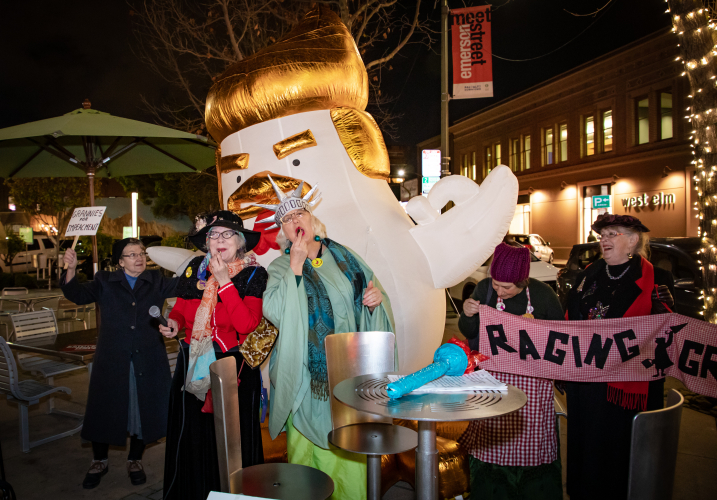 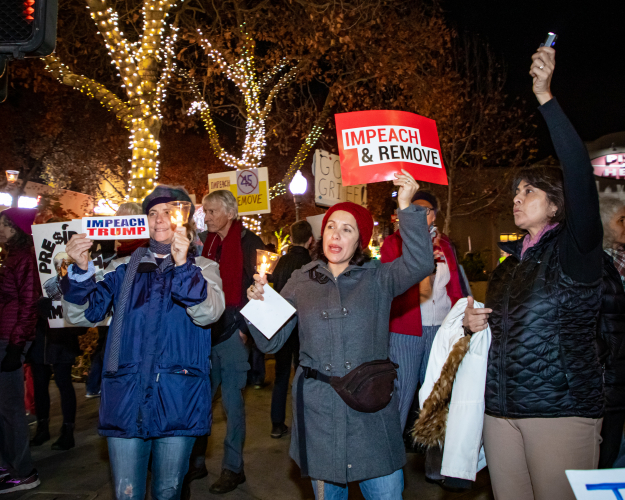 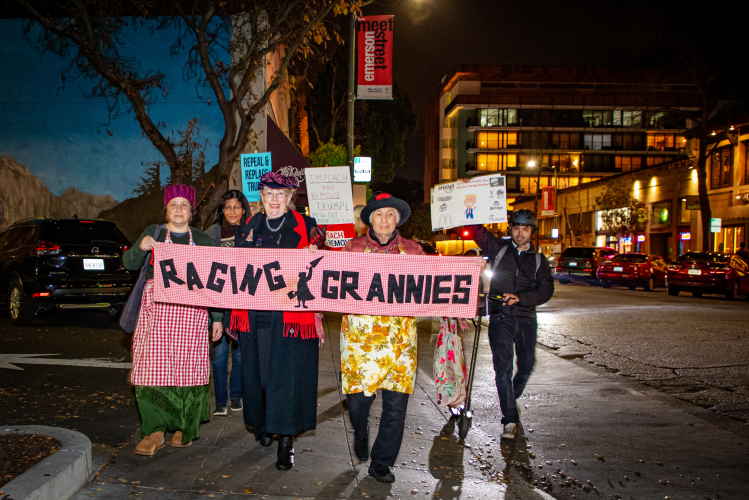 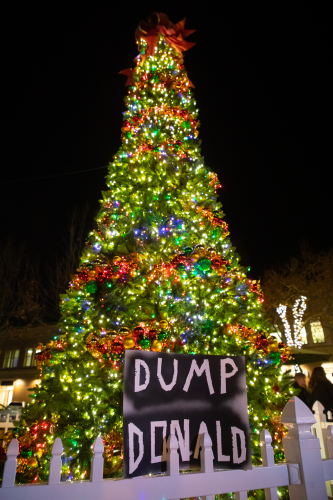 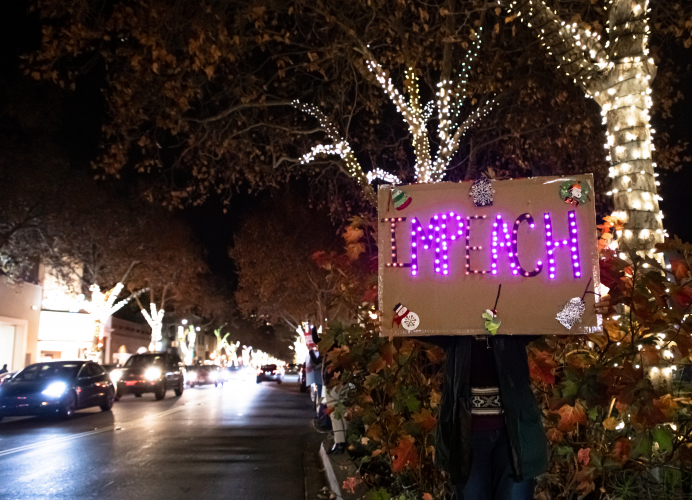 original image (5642x4076)
Stayed a long time with her sign at the corner of University and Emerson in downtown Palo Alto
Add Your Comments
LATEST COMMENTS ABOUT THIS ARTICLE
Listed below are the latest comments about this post.
These comments are submitted anonymously by website visitors.