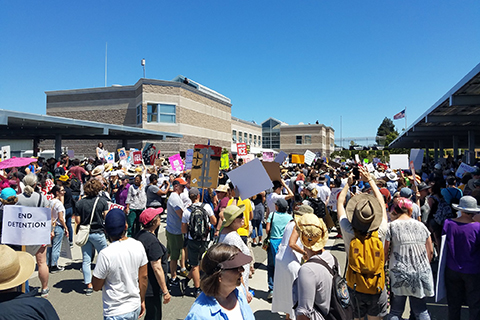 Demonstrators decrying Trump's policy of separating immigrant children from their parents have been in the streets in the San Francisco Bay Area and cities across the U.S. throughout the month of June. An even larger wave of protest hit on June 30 as immigration and children’s rights advocates rally in a national day of action, with rallies held locally in dozens of Northern California cities. One of the largest protests was at the West County Detention Facility in Richmond, the only ICE detention center in the Bay Area. In all, close to 100 protests were held in the state of California, at least ten of those in the Greater Bay Area.

Appearing to back down after massive public pressure, President Trump signed an executive order on June 20 that the administration claims will end the large-scale practice of splitting up parents and kids. However, immigrant rights advocates say that authorities will now detain families together, and that they will do so indefinitely. Additionally, it is unclear how the Department of Homeland Security will even reunite children already separated from their parents since proper records were not kept of familial relationships. Organizers of the national day of action on June 30 insist that children and parents must not be reunited only to be then held in prison camps.

We Have a Moral Imperative to Fight for Children Who Have Been Taken From Their Parents | ACLU Issues Statement of Support: Families Belong Together | US District Judge Orders Border Authorities Must Reunite Separated Families Within 30 days |

Demonstrators/Speakers in Richmond Call for Abolition of ICE (6/26) |

Publish your own reports, photos, video, and/or audio from any and all ICE protests to Indybay's newswire: www.indybay.org/publish.php