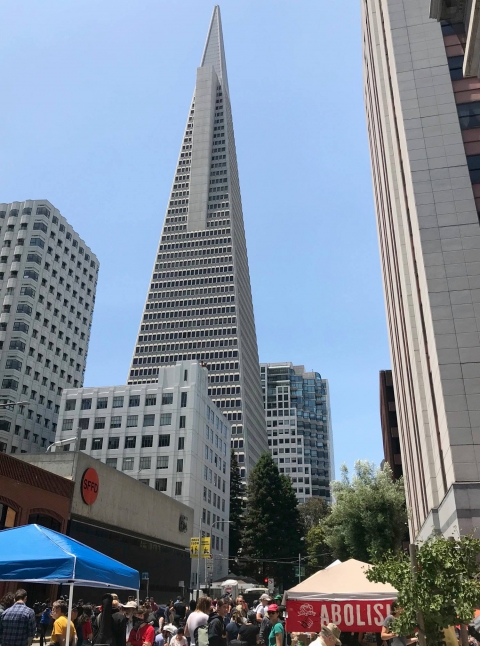 Following nationwide protests against ICE on June 30, "Block ICE" protesters set up chain link and barbed wire fencing in front of the main entrance to the U.S. U.S. Citizenship and Immigration Services building in San Francisco and surrounded the building with their bodies on July 2. At the conclusion of demonstration, tents went up in front of metal gates used by buses transporting detained immigrants. A core group of protesters are now staying around the clock at the encampment at 444 Washington Street.

Participants cite ICE’s violation of human rights as the primary reason for the action and have erected a pavilion and utilized the barbed wire fence from the previous demonstration to fortify their barricade. A statement released by occupiers reads, "We are also standing against a system of border imperialism that makes arbitrary definitions of citizenship".

Occupiers welcomed hundreds of people who came to an “ICE Block Party” on the 4th of July. They encourage folks to stay the night whenever possible, and to bring supplies including food, water, beverages, ice, and coolers. In addition to daily sustenance, organizers say volunteers have arrived with music performances, instruments, and sound systems that are helping protesters “turn up the heat and melt the ice”.