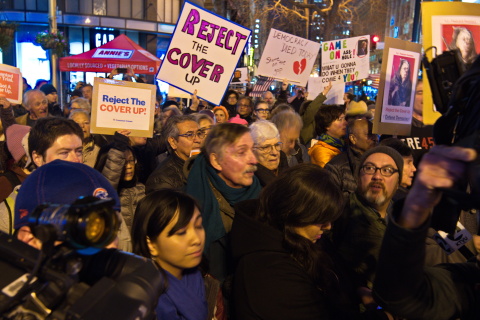 In the U.S. Senate impeachment trial of Trump that concluded with an acquittal on February 5, Republicans senators refused to let people with direct knowledge of Trump's behavior testify. Republicans did not allow witnesses such as John Bolton, Trump's former national security adviser, or Dick Mulvaney, chief of staff, to tell what they knew. Defense attorneys argued with, according to legal scholars, legally absurd arguments. They also claimed that although the facts might be as presented by the Democratic prosecution, these facts did not matter. In a final blow to long accepted constitutional theory, defense attorneys argued that a President could do whatever benefited him personally if he thought it was in the public interest, a theory previously promoted by France’s king, Louis XIV who said "l’état, c’est moi” ("I am the state").

The same day Trump was acquitted, protesters in the Bay Area and across the country hit the streets and called out the trial out as a “hoax," “sham,” and “fake," using some of Trump's favorite words to describe events that don‘t accord with his notions. Organizers of the action included El Cerrito Shows Up, East Bay Indivisible, Refuse Fascism, and Public Citizen. Under the slogan, “Reject the Coverup," the demonstrations held throughout the country were supported by many other groups including Citizens for Responsibility and Ethics in Washington, People for the American Way, Democracy for America and Greenpeace.

"Senators, Are You Completely Morally Bankrupt?" and Other Signs at San José Protest |

Oakland Protesters Insist Senate Trial Was a Cover-Up, Not an ExonerationOakland |

El Cerrito Shows Up to Say: No Witnesses, No Fair Acquittal |