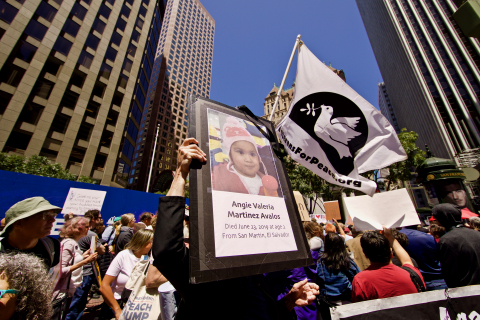 Plans for a mass roundup of migrant families that have received deportation orders, announced on June 21, set off protests throughout the nation as Americans reacted in horror. Outraged particularly by eye witness reports of mistreatment and deaths of migrant children held in barbarous conditions, people across the nation demonstrated June 22 through July 5.

Japanese Americans were some of the first to organize and demonstrate. On June 22, Japanese American incarceration survivors protested the plan to jail migrant children at a prison camp in Oklahoma that once held Americans of Japanese ancestry. Elders who experienced incarceration by the US government said that, due to their WWII experience when they were forced into camps, they understand how brown and black people are criminalized. In San Jose, demonstrators gathered near the steps of the historic Issei Memorial Building in Japantown on June 27 to say, "Never again is now."

On June 29, people marched for immigrant rights in Fresno's Tower District. On July 2, a national day of action to protest immigrant detentions was called for by a coalition of organizations that included MoveOn, the ACLU, and the Border Patrol Victims Network. Actions were held in Palo Alto, Walnut Creek and other Bay Area cities. Also on July 2, in San Francisco, a street protest set for Senator Feinstein's office at One Post Street at noon grew to an estimated 1,000 people by 12:30pm. Demonstrators spilled into Market street shutting down traffic and forcing streetcars and buses to detour. From Post Street, they marched to the Federal building on Seventh, where they chanted for a representative of House Speaker Pelosi's office to come down and hear their demands.

July 5 was once again the site of protest at the Federal Building in San Francisco when Jewish Americans and others said, "We've seen this before," and demanded the closure of detention camps. Another round of protests will start with an international day of action on July 12 (

Signs Seen in San Francisco on Day of Action to Close the Camps Pt. II |

Signs Seen in San Francisco on Day of Action to Close the Camps Pt. I |

Singalong at Close the Camps Rally in Palo Alto