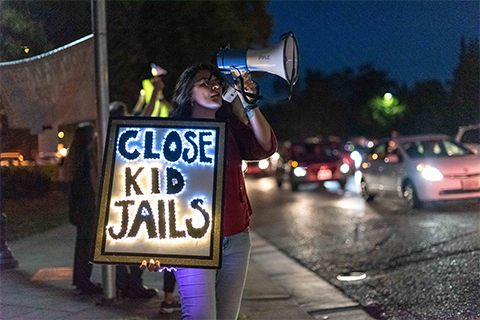 As news continues to pour in that the Trump administration’s attacks against immigrants and refugees has reached new lows, San Francisco Bay Area residents are feeling a renewed sense of urgency. On the heels of protests throughout the region on July 2 and further official announcements about coming ICE raids, July 12 saw a new round of demonstrations, including back-to-back protests at the city of San Francisco's Sansome Street ICE facility. In Palo Alto, Palantir Technologies was targeted for profiting from ICE contracts; additional demonstrations were held in Santa Rosa, Mountain View, Redwood City, Oakland, Berkeley, Concord, Fremont, San Jose, and elsewhere.

The Rapid Response Network (RRN) in Santa Clara County reported a recent increase in calls of observed ICE activity, as people are on high alert. In just this one county there are roughly 800 volunteers who respond when local ICE activity is reported, taking notes about or video of interactions between ICE and immigrants. As do similar immigration support groups across the US, the Santa Clara County RRN runs a 24-hour hotline that anyone can use to report ICE sightings in their neighborhood. The county's cities of Mountain View and San Jose have had increased reported ICE citings, and volunteer training registrations recently doubled.

Rapid responders create thorough documentation to ensure that ICE agents aren’t violating immigrants’ rights. In addition, they collect information to connect detainees with immigration lawyers after they’ve been arrested. Once ICE agents leave the scene, or if responders arrive to find it was a false alarm, volunteers then assist the local community by passing out cards with the hotline information. One of their top priorities is to remind undocumented families of their rights if ICE agents are to show up.

Lights for Liberty Protest: Compassion Has No Walls |

Never Again is Now Rally at UU Church in SF |

"Stop ICE" Demo in José Lights Up the Night |