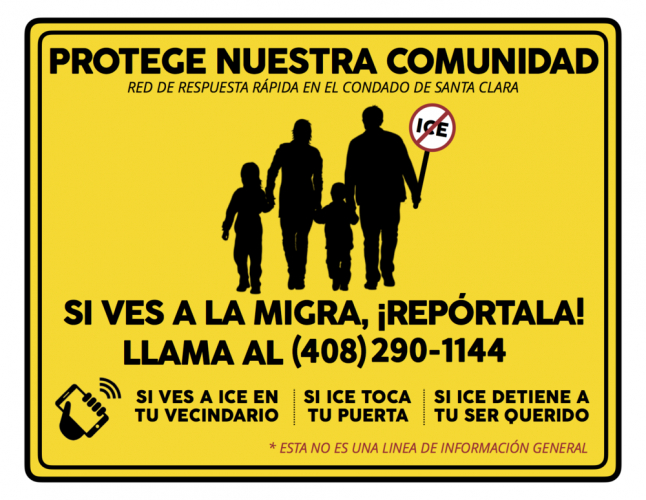 original image (1000x773)
The Rapid Response Network in Santa Clara County is a group of about 800 volunteers tasked with responding to and documenting local ICE activity. It is similar to other Rapid Response Networks across the US in that it runs a 24-hour hotline that anyone can use to report ICE sightings in their neighborhood.

By dispatching volunteers in the reported area to observe and take notes about or video of the interactions between ICE and undocumented immigrants, they hope to ensure that ICE agents aren’t violating immigrants’ rights. In addition they get information to connect detainees with immigration lawyers after they’ve been arrested. Once ICE agents leave the scene, or if responders arrive to find it was a false alarm, volunteers then assist the local community by passing out cards with the hotline information. One of their top priorities is to remind undocumented families of their rights if ICE agents are to show up.

As reported in the Mother Jones article “Document, Reassure, Keep Calm” there has been increased attention in cities with high immigrant populations, like Mountain View and San Jose. In both, the Rapid Response Network of Santa Clara County tries to canvass a few times a week to ensure people there know who to call when ICE is nearby.

There has been an increase in calls reporting ICE activity in the past few months, as people are on high alert. Volunteer registrations have increased at a rapid pace as ICE threats have grown.

Calfornia Rapid Response Networks
https://ccij.sfbar.org/california-rapid-response-networks/
https://www.motherjones.com/politics/2019/...
Add Your Comments
Support Independent Media
We are 100% volunteer and depend on your participation to sustain our efforts!