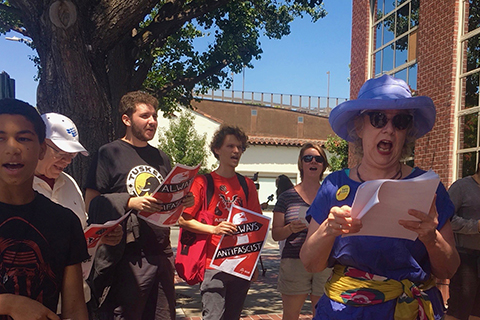 In Palo Alto and San Francisco, demonstrators joined a national call-to-action by Movimiento Cosecha, a movement working for the protection of undocumented persons. The campaign #NoBusinessWithICE targeted institutions that have contracts with ICE and profit from family separation.

On July 31, protesters demonstrated in front of Palantir in downtown Palo Alto. Palantir runs a data program called Investigative Case Management that allows immigration agents to access a vast ecosystem of data that helps them find their targets and form cases against them. Demonstrators demanded that CEO Alex Karp cancel the company’s contract with ICE.

From July 29 to 31, a flurry of immigrant solidarity activities during a 48-hour vigil at the U.S. Citizenship and Immigration Services building in San Francisco reaffirmed the goals of the ICE occupation that was held there for one week before it was raided by the San Francisco Police Department on July 9.

In the East Bay, ICE contractor Palantir will be present on UC Berkeley campus on August 31 to recruit potential future employees.