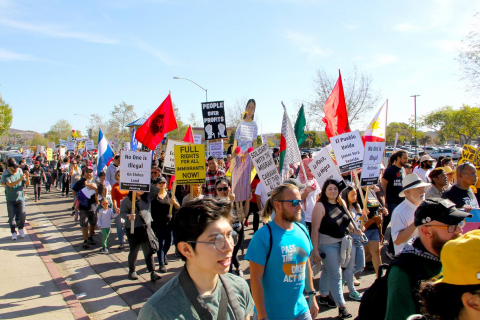 The Mexican government is demanding an investigation after U.S. border authorities fired tear gas into a group of asylum seekers on November 25. After weeks of travel and ten days living in squalid conditions in a stadium in Tijuana, several hundred unarmed migrants marched towards the border in an attempt to reach the United States. They were first violently confronted by Mexican police and then fired upon with tear gas canisters by US forces.

Mothers with toddlers were amongst those who ran and screamed as tear gas spread. The migrants, most of whom are from Honduras, Guatemala and El Salvador, are fleeing violence and desperate poverty in their homelands. While the Border Patrol’s attack on asylum seekers is being condemned worldwide, Trump is urging Mexico to deport the thousands of migrants as they approach the US border.

Over 200 people attended a rally and march in San Ysidro on the morning of the attack. Members of Refuse Fascism LA who were at the protest report that they heard the tear gas, saw the armored vehicles, and witnessed the US military with machine guns. They said that low flying US Marine helicopters circled the area the entire morning and were directly overhead the protest. Along with dozens of human rights organizations they are calling for an end to the US war on immigrants.

In Northern California, protests were held on November 25 in San Francisco, and on November 26 in Palo Alto. On December 1, in solidarity with a nationwide "Stop the Tears Day of Action," protesters gathered in Oakland, El Cerrito, San Francisco, and Santa Cruz, and on December 2, in San José. A regular peace and justice protest is held at noon on Fridays in Palo Alto at a major intersection near the entrance to Stanford University.

No Más Lágrimas-Día De Acción....Stop the Tears - Day of Action |

Protest on the Peninsula: Condemning Violence Against Asylum Seekers |

Refugee Caravan Carries On to Defend the Right to Seek Asylum |

Pueblo Sin Fronteras Stands In Solidarity with the Refugee Caravan |